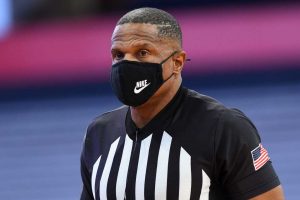 NCAA senior vice president of basketball Dan Gavitt said Tuesday he was not concerned about a dilution in the quality of officiating for the men’s tournament after six referees were disqualified due to one positive COVID-19 test and subsequent close contacts that were determined by the Marion County Public Health Department in Indiana.

Among that group, according to a report by Stadium, are some of the most well-regarded veteran referees in college basketball including Ted Valentine, John Higgins and Roger Ayers. The NCAA would not identify which officials were impacted due to privacy laws.

“It’s an unfortunate and disappointing situation for everyone involved,” Gavitt said.

The NCAA typically utilizes 109 officials for the tournament, narrowing that group for each round based on how their performance was graded. This year, because the NCAA is playing the entire tournament in the Indianapolis area and trying to limit the number of people within the closed environment, the NCAA had just 60 officials pegged to work the tournament with 17 alternates lined up in case of COVID-19 positives or other issues.

“We’re still well within what we’d have in a normal year,” Gavitt said. “All 17 (alternates) have been evaluated through the entire season by (head of officiating) J.D. Collins and his staff to be tournament-worthy officials.”

Referee Ted Valentine looks on during a game between Pittsburgh and Syracuse on Jan. 6, 2021. (Photo: Rich Barnes, USA TODAY Sports)

Stadium reported that the six officials who were disqualified from the event arrived Sunday night and went to a restaurant to eat after being told their hotel rooms weren’t ready upon arrival. All Tier 1 personnel at the tournament were supposed to quarantine in their rooms until getting tested twice, at least 12 hours apart.

When one of the members of the dinner party tested positive for COVID-19, the five others at the table were ordered to quarantine and thus will not be able to referee in the tournament.

Gavitt declined to get into specifics about where the NCAA’s protocols or intake system broke down or why the hotel rooms weren’t ready on time.

“Like any large-scale event sometimes things happen on time, sometimes slightly delayed,” he said. “Everyone’s responsibility is to make their own decisions to be safe and healthy and ready to participate. This is a virus that we don’t control, it controls us not just from an event standpoint but from an individual standpoint.

Gavitt said the official who tested positive did work conference tournament games last weekend but that local contact tracers determined there was no risk of exposure for any of the teams that participated in those games.

The NCAA processed about 2,300 tests Monday, Gavitt said, with five positives. Not all of those positives are necessarily attached to teams in the tournament, as they included event personnel. The NCAA was waiting on more test results from later Monday.

Georgia Tech is one team dealing with a positive test, according to coach Josh Pastner on Tuesday. The person who tested positive was identified only as a member of the traveling party.

Gavitt said he did not expect any of the 68 teams to be forced to withdraw by the 6 p.m. ET deadline Tuesday when they could be replaced, though Virginia is still not in Indianapolis and is awaiting clearance to travel later in the week.