Mullen lands extension with Gators through ’26 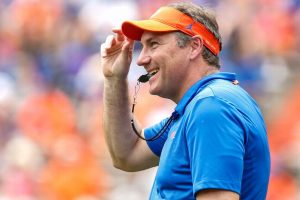 Florida Gators football coach Dan Mullen has received a three-year contract extension through the 2026 season that raises his annual salary to $7.6 million a year.

The new annual salary will make him the third-highest-paid coach in 2021 in the SEC, behind Alabama coach Nick Saban ($9.1 million) and LSU coach Ed Orgeron ($8.7 million). The salary also ranks him No. 5 nationally. Florida released the information Tuesday in response to a public records request.

“Dan has done a tremendous job in his three seasons at Florida, and we are fortunate to have someone with his obvious talents and head coaching experience leading our football program,” athletic director Scott Stricklin said in a statement. “I look forward to working alongside him to support his vision for Gators football and our student-athletes for many years.”

Mullen received a $1.5 million annual raise after taking the Gators to the SEC championship game behind Heisman finalist Kyle Trask. Going into his fourth season with the Gators, Mullen has gone 29-9 at Florida — including three straight New Year’s Six appearances.

“We are very excited about the future of the Florida football program, and this agreement allows us to continue to build on the success we have enjoyed on and off the field,” Mullen said in a statement.

But the 2020 season was not without its share of controversy for Mullen, who notably made headlines when he called for Florida to “pack the Swamp,” amid the coronavirus pandemic, after a loss to Texas A&M. Later in the season, he was in the middle of a benches-clearing brawl against Missouri and ended up getting fined $25,000.

Then in December, the NCAA put Florida on one year of probation and gave Mullen a one-year show-cause order for recruiting violations.