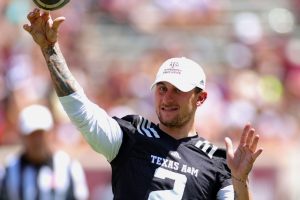 Johnny Manziel says he “made somewhat of a decent living” by selling autographed items during his days at Texas A&M, but that he “never took a dollar” until after he won the Heisman Trophy in 2012.

Manziel recounted selling his autograph during an interview with Barstool Sports, detailing two different transactions in 2013 that he says netted him $33,000.

“We’re doing it all sneaky, we don’t want to get caught, we’re trying to learn from everybody else who’s got caught,” Manziel said during the interview that was published Thursday by Barstool Sports. “And I may or may not have gone back to this guy’s condo and signed probably 10,000 pieces. He gave me three grand.”

Manziel said another individual approached him during that autograph-signing session and told him he was getting “ripped off” before offering to connect him with another man who would pay him $30,000.

“So this guy is like, ‘All right, go to this room at the Fontainebleau. All this stuff will be in there laid out, and when you’re done, just send me a picture of all of it, I’ll give you the code to the safe, the money will be in there,'” Manziel said.

The NCAA investigated Manziel before the start of his sophomore season at Texas A&M, but said there was no evidence that the former star quarterback received payment for signing autographs.

“I made somewhat of a decent living in college,” said Manziel, who then dared the NCAA to “take my f—— 9-4 season away and my Chick-fil-A Bowl against Duke.”

When asked during the interview what he would say if the NCAA attempted to strip him of his Heisman Trophy, Manziel responded: “I never took a dollar until after I won the Heisman.”

ESPN reported in August 2013 that the NCAA was investigating whether Manziel was paid for signing autographs at several locations, including in South Florida around the BCS title game earlier that year. ESPN reported that a set of autograph dealers claimed that Manziel accepted payments to sign more than 4,000 items, including footballs and photographs, at an event in Connecticut in late January 2013.

Manziel was suspended for the first half of Texas A&M’s 2013 season opener after the NCAA and school announced he had violated a bylaw prohibiting student-athletes from permitting their names or likenesses to be used for commercial purposes.

But that was the only punishment levied during the 2013 season against Manziel, the flashy dual-threat quarterback who set numerous records in college before flaming out in the NFL.

Manziel, 28, has not played in the NFL since 2015. He appeared briefly this year in the indoor Fan Controlled League, but acknowledged last June that his football career is probably “in the past.”