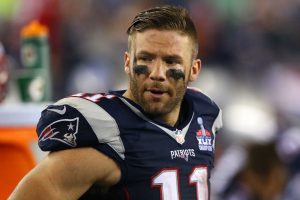 One of the best weekly parts of the “Manningcast” version of “Monday Night Football” is the guests they are able to line up for the show. The program is back for its seventh episode in Week 11 for a clash between the Giants and Buccaneers, and the Manning brothers will once again have a great guest list for their broadcast.

On paper, this always looked to be one of the easiest matchups for the Mannings to add guests. Peyton Manning could have tapped into his connection with his former Colts coach Tony Dungy, who coached the Buccaneers before going to Indianapolis, to get a former Bucs great on the broadcast.

Meanwhile, Eli Manning is obviously hyper-connected to the Giants’ franchise. That’s how he was able to get Michael Strahan on the show a few weeks back.

However, neither Manning brother utilized those connections. Nonetheless, they have put together an intriguing lineup for the broadcast.

“Monday Night Football with Peyton and Eli” has had plenty of strong moments with its guests, but none have been better than Marshawn Lynch’s performance in Week 7. He appeared on the show and admitted he had been drinking Hennessy (and dropped plenty of profanity during the broadcast). That was the episode during which Eli Manning famously showed the camera the double bird, which prompted three complaints to the FCC.

Will any guest top Lynch? It will prove tough, but the lineup is once again star-studded and contains within it another Manningcast curse candidate.

Here’s a look at the guest list for the Week 11 airing of “Monday Night Football with Peyton and Eli” during the Buccaneers vs. Giants game.

Parcells will be the first guest of the “ManningCast” in Week 11. He is a sensible choice, as the Pro Football Hall of Famer is regarded as one of the best coaches in NFL history. He posted a 172-130-1 record from 1983 to 2006 while coaching the Giants, Patriots, Jets and Cowboys. He won two Super Bowls in charge of the Giants and led the Patriots to one as well.

Parcells will be able to regale viewers with stories from the Giants’ heyday. He’ll also get to talk about Brady, an absolute shoo-in for the Hall of Fame, and could break down his game a bit.

It’s also worth noting that Parcells has an interesting connection to Peyton Manning. Parcells had the No. 1 pick in the 1997 NFL Draft when Manning was considering leaving Tennessee to go pro. Manning was expected to return to school, and Parcells didn’t attempt to sway his decision.

“I don’t look back on those things,” Parcells said of Manning’s choice, per the New York Daily News. “I knew he was going to stay in school.”

It will be interesting to see if that topic gets broached at all on this broadcast.

Kevin Hart has been making the rounds on NFL programming this week. He appeared on NFL Network’s “NFL Gameday Morning” on Sunday and heartily booed the Saints as they took the field to take on his beloved Eagles.

What can you expect from Hart in this one? He will probably throw a lot of shade at the Eagles’ divisional rival, the Giants, and he will almost certainly mention that Philadelphia beat Brady and the Patriots in Super Bowl 52. Aside from that, he’ll also probably mention his new show “True Story,” which drops on Netflix on Nov. 24.

So, if you’re wondering why this is the week for Hart and not an Eagles game, it probably has to do with that release.

Yes, Condoleezza Rice, the former U.S. Secretary of State, will be appearing on the “Manningcast” Monday night. This may seem like an odd choice at first glance, but Rice is a huge football fan and has key ties to the sport collegiately.

Rice was one of the 13 inaugural members of the College Football Playoff selection committee. She was involved in that group from 2013 through the end of the 2016 college football season. She has stated before that her “dream job” would be serving as the commissioner of the NFL. She first mentioned that possibility when Paul Tagliabue stepped away from that post, but the owners named Roger Goodell as the league’s new commissioner.

So, Rice does have more of a football background than most realize. She also was in attendance for the Colts’ 2007 trip to the White House, so perhaps she knows Peyton Manning from there. Either way, she should bring a unique perspective to the show, and perhaps the Mannings will grill her about the CFP selection process.

Edelman will join “Monday Night Football with Peyton and Eli” for the fourth quarter of the game. Edelman spent his whole career with the Patriots and squared off in many rivalry games against the Mannings. He racked up 35 catches for 341 yards and four TDs in four games against Manning’s Broncos from 2013 to 2015 and was a thorn in the side of the Broncos’ defense.

Edelman is very good friends with Tom Brady, so he will be able to provide some insight into working with him. He also was a part of the Patriots during their Super Bowl 46 loss to the Giants, so Eli Manning will probably bring that up.

During his career, Edelman won three Super Bowl rings and was the MVP of Super Bowl 53. He caught 620 career passes for 6,822 yards and 36 touchdowns. He has the second-most receiving yards in postseason history with 1,442. He trails only Jerry Rice (2,245) in that category.

How to watch Peyton, Eli Manning on Monday Night Football

“Monday Night Football with Peyton and Eli” will be broadcast on ESPN2. It will also be simulcast on ESPN’s streaming service, ESPN+, which has several subscription options. You can view them all below.