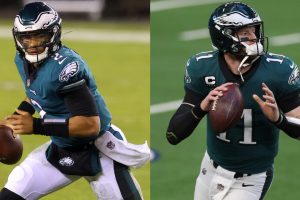 Philadelphia made a massive change Monday with the firing of Doug Pederson, and with it officially launched its search for his replacement.

Eagles owner Jeffrey Lurie believes the job is attractive because of the same quarterback situation that forced Pederson to answer questions about his guy(s) under center on a weekly basis. After all, what quarterback competition isn’t appetizing for a new head coach?

The Eagles once appeared to have a bird in the hand before growing curious about the contents of the bush, and now it’s unclear whether there are any birds in their vicinity at all. ﻿Carson Wentz﻿ regressed drastically in 2020, forcing Pederson to turn to rookie second-round pick ﻿Jalen Hurts﻿, who showed promise but didn’t get enough snaps to provide the Eagles with an evaluation anything near complete. Now that Pederson is gone, it’ll be up to his replacement to decide who is Philadelphia’s best option.

If the situation seems radioactive, it isn’t — yet. Hurts remains under contract on a rookie deal for three years, while the Eagles are financially tied to Wentz through 2021 before his astronomical dead cap number falls back to a realistic figure. With Lurie’s intent to remake the roster instead of trying to win in 2021, the new coach will have a long enough leash to tinker with the offense and figure out which quarterback is his guy.

We’ll likely see this play out for at least the next year before coming to a resolution, and it’s fair to expect an average-at-best product from Philadelphia for the time being. But as Lurie said, the Eagles might end up in the catbird’s seat come 2022 if they come to a decision at quarterback and move the other signal-caller for other assets.

It won’t be an overnight process and will likely accompany more losing than Eagles fans are accustomed to, with Lurie setting the bar lower by laying out his plan for the immediate future Monday. Lurie made it clear he believes the 2021 retooling is necessary for long-term success. Pederson was probably right to get out now, and a new challenge will await the next head coach of the Eagles.