NEW ORLEANS — When it mattered most, LSU defensive coordinator Dave Aranda finished with a shutout.

After much criticism throughout the season, including from coach Ed Orgeron, Aranda's defense held Clemson scoreless in the fourth quarter and to just eight points in the second half for a 42-25 national championship win in front of 76,885 at the Mercedes-Benz Superdome.

Clemson cut a 28-17 LSU lead to 28-25 early in the third quarter, but that was it for the defending national champions, who finished 14-1 with their first loss since the Sugar Bowl following the 2017 season.

"Coach Aranda had a great game plan since day one when we started studying Clemson," said LSU linebacker Patrick Queen, who finished with eight tackles, 2.5 tackles for loss.

"We trusted him and went to work on it," he said. "And together, to be able to make those kind of plays, I want to give God the glory for it. I want to thank Coach O for believing in me that I could play this position."

LSU's defense had allowed 160 yards in the first quarter and 286 by halftime. But Clemson finished with just 394. 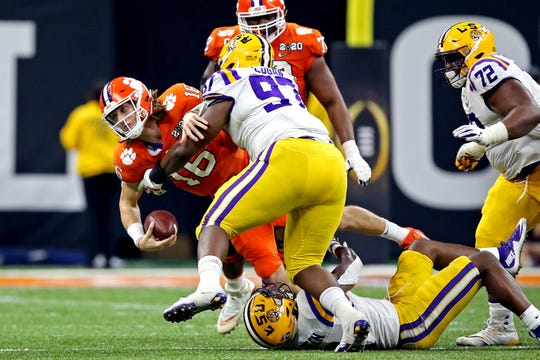 "At the end of the first half, Coach O sat us down, calmed us down," Queen said. "We were really anxious out there, so we just all gathered together and played team defense in the second half."

And quarterback Joe Burrow took over with five touchdown drives from the second through fourth quarters.

"We always knew this was Joe's team from the day he came in," Queen said. "He was competing in the sprints. So for Joe to be that kind of person to come out on day one and give us the best that he can, we already knew this was his team."