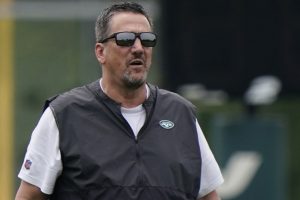 Knapp was hospitalized in critical condition after being struck by a motorist while riding his bicycle in San Ramon, California, on July 17. He remained hospitalized through Thursday before passing away.

“Today at 11:32 am PST, Greg Knapp (aka Knapper) was called back home to Heaven, where he will be reunited with his Dad,” Knapp’s agent Jeff Sperbeck said in a statement obtained by NFL Network’s Steve Wyche.

“Greg’s infectious personality is most people’s first and lasting memory of him.  The phrase “He never met a stranger” encapsulates Knapper’s zest for life,” Sperbeck continued. “He had a unique gift to make everyone feel special, and to Knapper, they all were.

“While his family, friends, and players still had so much to learn from him and desperately wished they had more time with him, God called an audible and wanted to go over the game plan directly with him. It will certainly be a masterpiece, just like Greg!”

The Denver Broncos and Las Vegas Raiders, organizations Knapp spent notable time with during his NFL tenure, issued statements regarding his passing.

“The Denver Broncos are heartbroken by the sudden, tragic passing of Greg Knapp, who was an outstanding coach and an even better person,” the Broncos stated. “In his four years as our quarterbacks coach, Greg was an instrumental part of two Super Bowl appearances and our championship run in 2015. The job he did coaching quarterbacks during our Super Bowl 50 season was masterful. He navigated a unique situation with poise and instincts, keeping us on track with his even-keeled demeanor, exceptional teaching ability and caring nature.

From all-time greats like Peyton Manning to young players just starting their careers, Greg was a trusted confidant and the very definition of a ‘quarterback whisperer.’ More importantly, the connections and friendships he forged with players, coaches and staff — as well as their families — were genuine and special. We will all remember Knapper for his kindness, humor and fun-loving approach to life. Our organization extends its deepest condolences to Greg’s wife, Charlotte; his daughters Jordan, Natalie, and Camille; and the entire Knapp family.”

Add Las Vegas, “The Raiders are saddened and stunned to hear of the passing of Greg Knapp, who served as offensive coordinator over two stints with the Silver and Black. The thoughts and prayers of the entire Raider Nation are with Coach Knapp’s family during this extremely difficult time.”

During his second stint in Atlanta, Knapp guided Matt Ryan to a league-best 13,971 passing yards from 2018 through 2020. The coach also worked with future Hall of Famers Steve Young and Peyton Manning, helping the latter set single-season NFL records for passing yards (5,477) and passing touchdowns (55) in 2013 while with the Broncos. Knapp and Manning earned a Super Bowl ring together two seasons later.

Knapp was set to coach his first season with the Jets and No. 2 overall pick Zach Wilson in 2021. He is survived by his wife, Charlotte, and three daughters Jordan, Natalie and Camille.