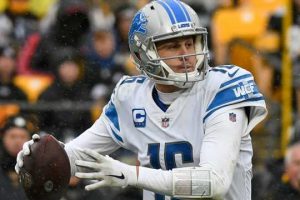 Jared Goff is raring to go for Thanksgiving Day.

The Lions quarterback is planning to start versus the Bears on Thursday barring any setback overnight, NFL Network Insider Ian Rapoport reports, per a source.

Goff, who missed last week’s game with an oblique injury, is officially listed as questionable. He participated in every practice this week on a limited basis. Leading up to Thursday afternoon’s game, Lions coach Dan Campbell said he was “leaning toward” starting Goff while the QB categorized himself as a game day decision.

Tim Boyle got his first NFL start in the absence of Goff last Sunday, completing 15 of 23 passes for 77 yards and two interceptions in the 13-10 defeat to the Cleveland Browns.

In nine starts this season, Goff has compiled 2,109 passing yards and eight touchdowns with six interceptions. Detroit nearly won in Goff’s last start, which ended in a 16-16 tie with the Pittsburgh Steelers. Goff managed to finish that game despite suffering his oblique injury in that overtime affair.

As the Lions (0-8-1) and their rookie head coach seek win number one, Detroit can rest assured one the eve of Thanksgiving Day with the return of their starting QB in the works.