Lions cut Dunbar after CB out for most of camp 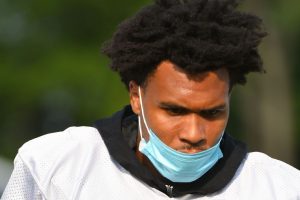 DETROIT, Mich. — One day ahead of the Detroit Lions’ preseason opener against the Buffalo Bills, the team announced Thursday that it has released cornerback Quinton Dunbar while signing free-agent running back Craig Reynolds.

Dunbar missed a significant portion of training camp due to personal reasons after agreeing to a one-year deal with Detroit this offseason following an injury-plagued 2020 season in Seattle, where he played just six games.

The veteran cornerback suffered a knee injury that required season-ending surgery with the Seahawks. Lions coach Dan Campbell addressed Dunbar’s situation Monday, but the team has now decided to go in a different direction.

“He’s communicating,” Campbell said. “We know where he’s at. We know what’s going on, and we’re thinking about him.”

Detroit’s secondary has been an area of emphasis, with the team recently adding cornerback Nickell Robey-Coleman while trying to push through early injuries.

So far, Lions defensive backs coach Aubrey Pleasant has been a ball of light, demanding respect of his group, and his relationship with Robey-Coleman played a big role in him joining the squad when there was interest from six to seven other teams.

“This was the right opportunity for me because of the people that’s here running things in this organization,” Robey-Coleman said. “It was the right opportunity for me and my family, and I felt like I could come here and put a footprint in this organization and actually be a part of this leadership, along with Jeff [Okudah], and do something special, do something big. Not just win, but win big.”

Dunbar, 29, made 25 starts over his first five NFL seasons with Washington, which signed him as an undrafted free agent out of Florida in 2015. He began his NFL career as a wide receiver, then was converted to cornerback as a rookie. He has 10 career interceptions and a sack in his six seasons.