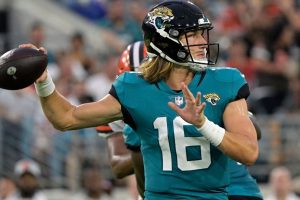 JACKSONVILLE, Fla. — Trevor Lawrence’s first NFL snap ended with a sack that nearly turned into a fumble but the Jacksonville Jaguars quarterback didn’t let that rattle him.

The No. 1 overall pick bounced back from that inauspicious start and turned in a solid but unspectacular performance in the Jacksonville Jaguars’ 23-13 loss to Cleveland at TIAA Bank Field on Saturday night. Lawrence threw for 71 yards — including a 35-yarder to Marvin Jones to convert a third down — but failed to lead the first-team offense to any points in his two possessions and admittedly held onto the ball too long at times.

But he also made several good throws and left his head coach feeling pretty good about the former Clemson standout — though there’s a lot of improvement needed.

“I asked [passing game coordinator Brian Schottenheimer] how he played and he said he did pretty good,” Urban Meyer said. “I thought the ball to his left right in front of us, I think it was on third down, he really anticipated a nice out cut, scrambled and delivered a nice one to Marvin Jones.

“He certainly wasn’t awestruck. We’ve got to execute better. We’ve got to protect him better and we’ve got to get all our wideouts healthy and just play better.”

Lawrence went 6-for-9 and, per NFL NextGen Stats, completed 3-of-4 of those passes into tight windows, which equaled the best completion percentage on tight-window throws by a Jaguars quarterback in 2020. The offense was also much more effective under Lawrence (74 yards) than Gardner Minshew, who threw for 47 yards and an interception and led the offense to 46 yards in three possessions.

“I feel like the first time out there, I felt comfortable, felt poised,” Lawrence said. “Obviously the first play’s not kind of what you want for the first play, but after that I thought we did a good job. We communicated well up front. They did a really good job of protection. At least one of those sacks was on me for sure, just holding the ball too long. That’s something I’ll work on. Just maneuvering in the pocket is something I’ve always got to work on.

“Other than that I missed an easy one to Marvin, a little quick out I wish I would have hit. But other than that. I felt good out there. I think we were seeing it, all on the same page. There’s obviously things to clean up but I thought it was a pretty good day.”

The biggest thing for Lawrence to clean up is getting rid of the ball quicker, which he did at times on quick throws to LaViska Shenault. Meyer said he’d need to look at the film to figure out why Lawrence was hesitant to get rid of the ball, but there were several times when he had to wait for receivers to get clear.

That was the case on the long throw to Jones. Nobody was open at first and it wasn’t until Jones broke deep that Lawrence was able to make a throw. Fortunately, Lawrence had good protection on that play — that wasn’t always the case as offensive tackles Cam Robinson and Jawaan Taylor struggled against Cleveland’s second- and third-team pass rushers. Lawrence was sacked twice in the game.

“I was in the pocket forever. Eventually it ended up turning into a scramble,” Lawrence said. “He did a good job of just getting open and reacting. That’s something we’ve been working in camp is the scramble drill. I didn’t actually scramble but everyone has the time clock of, ‘Alright the play’s not working as it was designed. At this point we’ve got to make something happen.’ He did a good a job of reacting quick, went up field. I could have led him a little bit more. I just didn’t want to overthrow him with the DBs back turned and he made a great catch.”

Lawrence admitted to having a bit of nerves, but said those went away quickly as he felt more comfortable on his second drive than his first.

“I usually typically get nervous before the first game of any season anyway so that’s pretty standard. I was excited. I was ready to get out there. It’s been a long time coming. It’s been my dream.”