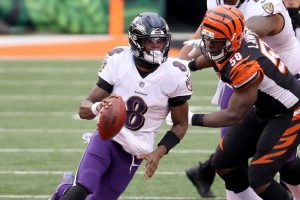 Baltimore Ravens star Lamar Jackson is the first NFL quarterback to rush for 1,000 yards in consecutive seasons, and is making a strong case that he’s already the best dual threat in league history.

With his blazing speed and jaw-dropping elusiveness, Jackson reached 1,000 yards with a 7-yard scramble in the third quarter Sunday against the Cincinnati Bengals. The reigning NFL MVP entered Sunday’s game needing 92 yards rushing to reach the milestone.

Jackson is poised to become the second quarterback to win NFL MVP and reach the playoffs in his first three seasons in the league, joining Dan Marino. The Ravens can clinch a wild-card berth by beating Cincinnati or if the Colts lose Sunday.

For quarterbacks, posting big back-to-back rushing seasons had proved elusive. Before Jackson, the previous two quarterbacks to rush for more than 900 yards in a season (Randall Cunningham and Vick) recorded less than 600 rushing yards the next season.