Home » NFL » Kyle Shanahan to Sean McVay on Matthew Stafford trade: ‘You don’t want to get me started, dude’

Kyle Shanahan to Sean McVay on Matthew Stafford trade: ‘You don’t want to get me started, dude’ 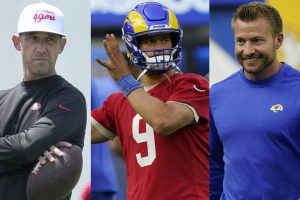 When the Los Angeles Rams made the blockbuster trade for Matthew Stafford﻿, both the quarterback and coach Sean McVay were famously in Cabo. Another key NFLer was also in the area but had a different take on the trade of his division rival: Kyle Shanahan.

With the San Francisco 49ers milling around the possibility of trading for Stafford, Shanahan was studying up on the 32-year-old QB.

Shanahan was recently on the Flying Coach podcast with McVay and Peter Schrager. McVay ribbed Shanahan, asking the Niners coach how he liked the Rams’ new addition.

“You don’t want to get me started, dude,” Shanahan responded. “That was frustrating. I was in Cabo. I was studying it all. … I remember looking through it because everybody was telling me it was a possibility. Stafford’s the man. I studied him hard coming out of college, and you always play against him, so you know how good he is. But to know he might be available and to spend two weeks really watching him, Sean, yeah, he’s better than I realized. He was the man. He’s actually underrated to me. I know how good of a guy you got. I know how good he is at play-action. I know how smart he is. Not only does he just have a big arm, but he’s got touch, he knows where to go with the ball. So I was trying to get involved in it.

“… I remember Saturday I was so stressed out and finally we talked to someone, it was seven at night, and they’re like, ‘No, nothing’s happening (with a trade) at the earliest until tomorrow, so you can finish your night.’ So I’m like, alright, I’m done. I put my phone down, talk to Mandy. I’m like, alright, ‘Let’s go out to dinner, let’s have some drinks.’ Half an hour later, my buddy calls me and is like, ‘I’m just telling ya, if you want Stafford, you need to get a hold of him right now.’ I’m like, ‘What do you mean? We just talked to people. I can sleep on this. We’ll talk to them tomorrow.’ ‘I’m just telling you, you need to talk to him right now.’ And then it was all over.”

“If it makes you feel any better, it came together faster than I thought, too, Kyle,” McVay replied.

“The fact I was in Cabo, man, I would have been there, and I would have made it really awkward on you two to enjoy it,” Shanahan bantered back. “You would have had to tell me to leave.”

A couple of asides:

Ultimately, the Rams shipped two first-round picks and Jared Goff to Detroit for Stafford, who L.A. believes can put them over the top after sputtering the past few seasons.

It’d been reported that the Niners were interested in trading for Stafford but never made an official offer after the bidding escalated. Shanahan lamenting all that studying on Stafford only to watch him go to a rival underscores that San Francisco intended to find an eventual replacement for Jimmy Garoppolo﻿. Instead, they ended up trading three first-rounders for the No. 3 overall pick to snag Trey Lance.

At least the film study Shanahan went through in Cabo won’t go to waste now that he has to face Stafford twice a year in the NFC West.