Kyle Rudolph has been released by the Vikings, bringing an end to his 10-year spell in Minnesota.

The 31-year-old tight end had spent his entire NFL career with the Vikings after they drafted him in the second round in 2011.

But, with two seasons remaining on a four-year, $36m contract, Minnesota have chosen to move on from Rudolph, which reportedly saves them $5.1m in cap space.

Writing in The Players’ Tribune following his release, Rudolph said: “I got so lucky because I didn’t just get drafted by some team who ‘had a need at tight end’.

“I didn’t just get drafted as, like, the nameless, faceless ‘No 1 tight end on the board’, I got drafted by a team that was all set in terms of need but then drafted me anyway. 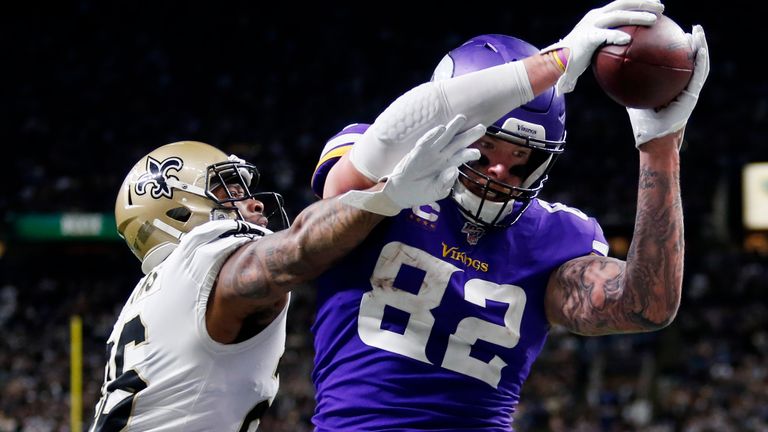 “I’ll always remember that; how the Minnesota Vikings wanted me and wanted to bet on my potential.”

Vikings head coach Mike Zimmer, who had worked with Rudolph for the past seven years, heaped praise on the tight end, saying: “Kyle has been a leader and mentor for us on and off the field from the first day I arrived in Minnesota.

Thank you Kyle for the impact you've made on our organization and the Twin Cities community. pic.twitter.com/aSvBkvUrWr

“He has been such an important part of this team and community throughout his career and it has been an honour to coach him the last seven seasons.

“He will be missed and we wish him and his family nothing but the best.”

One of his finest moments in a Vikings jersey occurred when he caught the winning touchdown pass in the 26-20 overtime victory over the New Orleans Saints in the NFC wildcard round in the 2019 season.