Home » K.J. Wright wants to stay with Seahawks, but not planning to take hometown discount

K.J. Wright wants to stay with Seahawks, but not planning to take hometown discount 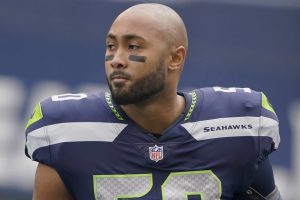 Seahawks linebacker ﻿K.J. Wright﻿ wants to stay in Seattle, but he doesn’t plan on giving the team a hometown discount to do so.

Wright, who is scheduled to become a free agent in March, told Jim Rome he didn’t plan on taking anything other than a market-value deal.

“I do way too much on the football field to take a discount,” Wright said, via ESPN. “It makes absolutely no sense. If you want to win all these championships and look good on Sundays, you’ve got to compensate your guys that are making plays. … I have a family and I’m trying to set up long, long-term success for my family.”

A key playmaker for the Seattle defense for the past decade, Wright’s comments are a matter-of-fact turnabout from the linebacker who has consistently said he wants to finish his career with the Seahawks. As has been the case with other big-name players in Seattle — ﻿Richard Sherman﻿, ﻿Earl Thomas﻿, etc. — perhaps Wright sees the beginning of the end given the fiscal restraints this season.

Losing Wright would be a massive blow to a defense that needs to add pieces this offseason, not subtract one of its top players.

Wright signed a two-year contract in 2019 worth $14 million, plus bonuses. After playing out that string, the 31-year-old would like another bite at the apple before his career closes.

The veteran’s preference would be to stay in Seattle if the Seahawks brass shows him the money.

“That would just be a beautiful story, if I could just ride it all out with the Seahawks,” Wright said. “That’s some legendary-type stuff. And like I said before I left, I believe it would be a great investment for Seattle to keep me because as you’ve seen, since I’ve been here, we’ve been nothing but awesome — always making it to the playoffs, winning our division, so they know how much I want to be here. But at the end of the day, I get it. [Because of the salary cap], they’ve got to clear some space to make things happen, so they’ve got to get busy.”