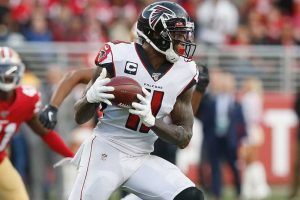 The Titans may not have been in the ideal position to trade for Julio Jones, but they did so anyway on Sunday, agreeing to acquire the former Falcons wide receiver in exchange for multiple draft picks.

Tennessee made the move as an AFC title contender in 2021, trying to build on an 11-5 season in which it won the AFC South. Atlanta was desperate for salary-cap space to better compete in the NFC South, and trading Jones makes $15.3 million more available — which was needed just to sign its rookie draft class.

The Titans will take on the contract Jones signed with the Falcons in September 2019. The seven-time Pro Bowler is set to make $11.513 million in each of the final two years of the current deal, 2022 and 2023.

Here’s how Sporting News assesses the trade for both teams:

The Titans avoided giving up a first-round pick next year and deferred the extra Day 3 pick compensation until 2023. From that end, GM Jon Robinson hit the deal out of the park, knowing his team could use an impact veteran starter opposite young star A.J. Brown after losing 2017 first-rounder Corey Davis (Jets) in free agency.

But the presence of Henry also has given the Titans an explosive play-action passing game for quarterback Ryan Tannehill. Brown (6-0, 226 pounds) has been a big part of that field-stretching success, averaging 20.2 and 15.4 yards per catch in his first two seasons, respectively. Jones (6-3, 220 pounds) is known to be a dangerous deep threat throughout his 10-year career, averaging 15.2 yards per catch. The Titans have raised their home-run ability and now have a second strength-speed matchup nightmare on the outside.

But with Jones, the Titans need big offensive results that will add up to going further than the Chiefs, Bills and other AFC powers in the playoffs. As well as Tannehill has performed in their system, the offense still has a ceiling in relation to the upside of Patrick Mahomes and Josh Allen.

The Titans already could move the ball and score with anyone, but no matter what Jones does to boost their offense, their pass defense issues — with big changes in the edge rush and secondary — still are what will likely keep them short of the Super Bowl.

Jones is also 32 and has a history of soft-tissue injury wear. He was hamstrung for much of 2020, missing seven games. Jones must be healthy and produce at his best level in the short term, because even with some contract finagling by the Titans, age and money suggest Jones has a small window with his new team. Tennessee also must dole out a high-end contract to Brown, whose rookie deal expires in 2023.

The Titans were smart to be aggressive now, but picking up Jones isn’t a risk-free move by any means. Should Jones give them All-Pro rewards, however, upgrade them to an A+.

Smith and new GM Terry Fontenot were charged with changing the course of the offense and getting the Falcons out of a salary-cap bind. While Smith’s former team enjoys Jones, he will center his passing game around 2018 first-round wide receiver Calvin Ridley, a rising second-team All-Pro from 2020. This also means rookie first-round tight end Kyle Pitts will see an even bigger immediate role as a different kind of dynamic second target for quarterback Matt Ryan.

The Falcons sought a first-round pick for Jones’ services, however, and fell well short of that. Everyone around the league knew they were motivated sellers on Jones, even before his infamous unintentional “interview” with “Undisputed” host Shannon Sharpe.

Taking on Jones’ contract, age and durability concerns wasn’t a good formula for most teams — outside of select contenders — so it was a case of the supply and demand adding up to limited compensation to get the Falcons out of a bind. The Titans did their biggest favor by helping to clear the Falcons cap, setting up some shrewd short-changing.

While Ryan adjusts to life without Jones — to whom he has thrown since 2011 — Atlanta will push forward to the future. Even replacing Ryan is on the horizon. Sacrificing some present potential with Jones still in the offense was worth it to the team, at the expense of questionable return.