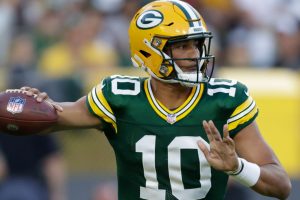 The redshirt year might have done Jordan Love more good than we realized.

After sitting out all of 2020, Love made his professional (preseason) debut Saturday night in Green Bay. It was worth the wait.

Love completed 12 of 17 passes for 122 yards and one touchdown, posting a passer rating of 110.4 before handing the reins to Kurt Benkert and calling it a night in a 26-7 loss to Houston.

After going three-and-out on the Packers’ first two possessions, Love found his feet on his third drive. The second-year signal-caller was calm, confident and decisive, leading the Packers on a nine-play, 88-yard scoring drive. Love looked comfortable and prepared, delivering the ball on time and (mostly) on target while keeping the Packers’ offense moving at an impressive pace.

Love benefitted from additional separation created by his receivers, but that shouldn’t take away from his performance on the drive. Backed up on his own 13-yard line, Love’s most impressive play came early in the possession on third-and-9. The quarterback stood tall in the pocket, and with a rusher bearing down on his blind side, he delivered a rope to a wide-open Jace Sternberger over the middle for a pickup of 34 yards. The completion awoke the offense, which carried the momentum from the completion for another 53 yards, capped by a well-executed screen to Kylin Hill﻿, who outran the defense for a 22-yard touchdown.

“Being able to find that rhythm is huge,” Love said. “Getting that first completion and being able to move the sticks, that’s kind of my takeaway from it. … Just being able to get that rhythm, move the ball, see the field, obviously in this game, it’s what wins.”

Love was largely precise with his passes, but owes Devin Funchess a free lunch after the big-bodied receiver used his large wingspan to snag a slightly errant throw from Love for a 15-yard gain down to the Houston 22. Packers coach Matt LaFleur later called it “an unbelievable catch.” Two plays later, Hill was in the end zone.

“He did a nice job,” LaFleur said of Love’s performance. “What we were really looking for is just going out there with command, making sure our operation was clean, making sure that he was decisive and on point with his decision-making. I thought by and large it was pretty solid.

A disclaimer is required: The Packers were facing the Texans, a team littered with veterans on one-year deals as the franchise transitions from annual battles for the AFC South title to something less exciting. It’s also Week 1 of the preseason. We’re not calling the tailor to send in Love’s gold jacket measurements.

Still, when faced with what was essentially a 50-50 chance of facing one coverage concept versus another, the Packers found success through the air with Love at the controls.

“Basically, Houston played two coverages all night: They played Tampa 2 and they played man,” LaFleur explained. “Obviously, if they’re gonna play a lot of man, you’d like to throw the ball, and we were pretty effective on that drive. If they’re gonna play Cover 2, you’ve got to be able to run it. We tried running the ball a little bit versus some of their man coverage looks, some of their single-safety looks and we just weren’t very effective.”

With the lack of a running game considered, Love’s performance was impressive. It was also supposed to last longer than it did.

LaFleur said afterward the plan was to play Love for three quarters, but he got “dinged” when strip sacked late in the second quarter, and the Packers staff decided that would be it for him. LaFleur added he’ll provide an update on Love’s status on Sunday.

After a year spent not knowing pretty much anything about Love, his first on-field action in a Packers uniform was encouraging. And for a period of time Saturday night, it was exciting. Perhaps it’s just a preview of what lies on the other side of the Aaron Rodgers era.