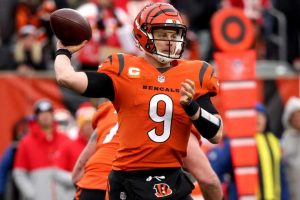 Joe Burrow did everything within his power down the stretch of the season to will the Bengals to the AFC North title.

The entire campaign for Burrow had been an impressive turnaround after he tore both the ACL and MCL in his left knee during his rookie season, helping make him a strong case for Comeback Player of the Year.

But in the final two games in which he played, matchups against AFC North rival Ravens and the AFC’s champion of the past two years, the Chiefs, Burrow turned his game up to another level. He passed for nearly 1,000 yards and passed for four touchdowns in each game, delivering wins to Cincinnati in each to clinch the division title and give the starters a day to rest in Week 18.

What does that stretch mean for the Bengals, and where did it rank in history? Sporting News breaks it down.

Coming off a win against the Broncos in Week 15, the Bengals needed to beat the Ravens, a Browns’ loss and a win in at least one more game down the stretch in order to finish the season as the AFC North champions.

Before Cincinnati even took the field in Week 16, the Browns lost to the Packers on Christmas day, meaning that the Bengals needed only to beat Baltimore and win one more game the rest of the year to be crowned the champion. That game, Burrow put up the best numbers of his career, passing for 525 yards and four touchdowns with an 80.4 completion percentage against a battered up Ravens’ team to blow away Baltimore and win 41-21. It was a single-game passing record for Cincinnati and the fourth-most in a single game in NFL history.

Somehow, Burrow managed to find a way to one-up the performance. Playing against a stronger opponent and healthier defense in Kansas City, Burrow completed 76.9 percent of his passes for 446 yards with four more touchdowns to help lead the Bengals to a 34-31 win, clinching the division crown and sending Cincinnati to the playoffs for the first time since 2015.

The final two games concluded what was a remarkable sophomore campaign for Burrow. He finished the season with a 70.4 percent completion percentage, 4,611 passing yards, 34 touchdowns and 14 interceptions. The passing yards and passing touchdowns were the most in a single season in Cincinnati franchise history, while his completion percentage was the best among qualifed QBs in the NFL in 2021.

He also ranked sixth in passing yards and eighth in passing touchdowns in the NFL, and he led the league with 8.9 yards per attempt.

Pro Football Focus graded him out as the second-best QB in the league by offensive production (91.7) and the No. 1 by pure passing grade (91.2).

During those final two games of the season, Burrow collectively passed for 971 yards with eight touchdowns, a completion percentage of 78.8 percent and no interceptions.

The game put him in rare company, and nearly broke the record for the most passing yards in consecutive games.

First of all, Dak Prescott was on another level to start 2020 (1,424 passing yards in three games is an impressive run). But another aspect that makes Burrow’s performance all the more impressive is that unlike the other QBs, his came at the end of the season with his team needing wins to reach the postseason, while the others came earlier in the season.

What adds to the impressiveness is just how complete the games were by Burrow. The Bengals’ QB is one of only three quarterbacks to have multiple games of 400-plus passing yards, four touchdowns and no interceptions in a game, joining 2013 Peyton Manning and 2018 Jared Goff. He’s the only QB to have multiples where he also completed at least 70 percent of his passes in each game.

That’s getting nit-picky, but it underscores the accuracy that Burrow has displayed this season. There are games where quarterbacks air it out to either play catch up or just target a weak passing defense, but maintaining a 70 percent completion percentage is difficult. He did it in two games where he also threw for well over 400 yards.

So does Burrow have a case for MVP? Most certainly.

FanDuel Sportsbook currently lists Burrow as having the third-best odds to win MVP (+2500), albeit well behind Aaron Rodgers (-500) and Tom Brady (+400).

Burrow’s season has put him in rare company. Only 20 quarterbacks in NFL history had a season in which they passed for at least 8.5 yards per attempt and completed 30 touchdown passes, according to Stathead. Nine of those campaigns ended with the QB winning MVP. Seven of those quarterbacks are in the Pro Football Hall of Fame. Among the names not in the Hall of Fame are Brady, Rodgers, Drew Brees, Patrick Mahomes and Philip Rivers.

Obviously, Rodgers and Brady will be tough to pass. Rodgers led the NFL in quarterback rating and threw the fewest interceptions (four) and the fourth-most touchdowns (37), along with 4,115 passing yards. Brady led the league in passing yards (5,316) and passing touchdowns (43).

But don’t count Burrow out of the race. He turned Cincinnati around from the fifth-worst team in the NFL to a division champion. Not to mention that repeat MVPs are rare, as the last player to achieve the feat was Peyton Manning in 2008 and 2009.

On Saturday, Burrow will look to make a statement and give the Bengals their first playoff win since 1991, when they take on the Raiders at 4:30 p.m. ET.