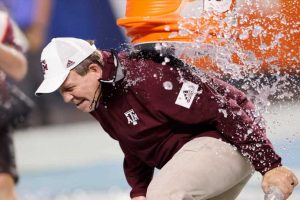 The third-year Aggies coach fled from his players as they tried to dump the drink on him following their victory against the Tar Heels. It was their first New Year’s Day 6 bowl win, one that capped a 9-1 season that should see the team finish in the top five of the final top 25.

Following the immediate postgame celebration, Fisher revealed he pulled his hamstring running from the frigid liquid:

“I pulled my hamstring. Somebody in there’s gonna pay for that,” Fisher said. “I haven’t run that fast in 25 years.”

To be fair, Fisher wasn’t the only coach who ran from a Gatorade bath: His Georgia contemporary, Kirby Smart, did the same (albeit a little more successfully). That said, the game took place in Miami Gardens, Fla. It’s not that cold.

Something for Fisher to remember next time his team wins a big bowl game.