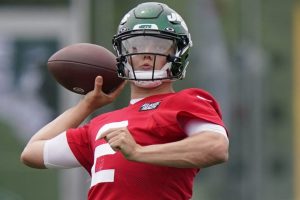 Zach Wilson’s brief absence from Jets training camp has come to an end.

The No. 2 overall pick agreed to terms with the club on his rookie deal, NFL Network Insider Ian Rapoport reported Thursday afternoon. Wilson was the last 2021 first-round pick to sign his rookie contract after 49ers quarterback Trey Lance inked his deal Wednesday.

Wilson will receive a slotted $35.1 million on the deal with a $22.9 million signing bonus. Rapoport reported the BYU product will get the bonus within 15 days. That was a sticking point in contract talks between Wilson and the Jets. As a compromise, Wilson’s contract will include offset language.

Without Wilson in tow for the first few practices of Jets camp, New York were left with backups Mike White and James Morgan under center Wednesday and Thursday. But the QB reportedly took a red-eye flight Wednesday evening from Los Angeles to New York, Rapoport noted, and is ready to start practicing.

Jets coach Robert Saleh never expressed “panic” about Wilson missing too much time — less than 24 hours before Wilson agreed to terms, Saleh told reporters to ask him again tomorrow about Wilson’s absence. But after practice Thursday and before the Wilson news broke, Saleh did say that Wilson’s two days of camp missed were “two days too many already.”

“It’s more concern for the kid,” he said, per SNY. “This young man has a chance to do something special here that hasn’t been done in a long time.”

Wilson can begin building that something special right away now that he’s signed.