Jets GM open to Darnold offers, not trade for star 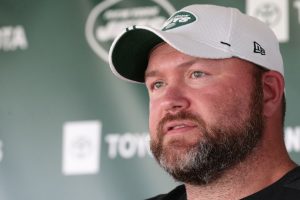 FLORHAM PARK, N.J. — The New York Jets, who once considered quarterback Sam Darnold an untouchable asset, are open to listening to trade offers.

“I will answer the call if it’s made,” general manager Joe Douglas said Wednesday in a video conference with reporters, confirming previous reports that the Jets are willing to field inquiries.

The Jets are facing a major quarterback decision: stay with Darnold, draft a replacement with the second overall pick, or perhaps pursue Houston Texans star Deshaun Watson if he becomes available — a potential scenario that Douglas downplayed.

Douglas said he’s in no rush to make a quarterback decision, but there’s a pressing deadline with regard to safety Marcus Maye, a pending free agent whose agent lashed out at the Jets on Tuesday night on social media. The GM dismissed the criticism, saying the goal is to sign Maye to a long-term contract. Failing that, they could use the franchise tag by next Tuesday’s deadline.

The quarterback drama remains the headline, especially in light of Darnold’s struggles.

At the 2019 trade deadline, Douglas said he’d listen to offers on every player except a franchise quarterback — and he put Darnold in that category. Clearly, that position has changed. Since the end of the season, the organization has remained noncommittal on Darnold.

“As it pertains to Sam, we think Sam is a dynamic player in this league with unbelievable talent,” Douglas said. “He really has a chance to hit his outstanding potential moving forward. [But] if calls are made, I will answer them.”

The Jets have received multiple calls from interested teams, ESPN’s Adam Schefter reported previously. Their plan is to evaluate the top quarterbacks in the draft before making a decision on Darnold. The top candidate with the No. 2 pick is thought to be BYU’s Zach Wilson. Douglas said they’re gathering “as much information — good information — as we possibly can” on the available quarterbacks. Another option is sticking with Darnold and trading the second pick for a haul of draft picks.

The wild card is Watson. With two first-round picks in the upcoming draft, and two more in 2022, the Jets have the ammunition to pull off a trade of that caliber.

By rule, Douglas is prohibited from commenting directly on Watson, but he didn’t seem enthused about the prospect of trading significant draft capital for one player. That, of course, could be posturing.

“Obviously, we have a lot of different scenarios and a lot of different rabbit holes we can go down,” he said, responding to a general question about a potential blockbuster deal. “Not to get so much into a hypothetical question, but I just go back to [our philosophy].

“For us to get to where the great teams are, the most consistent teams are, you do that through the draft. It’s the most team-friendly market in sports. For us to be a team that’s consistently competing for Super Bowls, we have to hit on our draft picks.”

The Jets have a history of trading away top draft picks. They traded unhappy safety Jamal Adams last summer, and now Maye — his former sidekick — appears to be disenchanted with negotiations. Agent Erik Burkhardt tweeted that the Jets “refuse to take care of their best player, captain and team-voted MVP.”

Douglas brushed it off, indicating it’s part of the business and negotiations. He said they’ve had “productive conversations” with Maye’s agents, adding, “Our plan hasn’t changed. We’re in the process of working to have Marcus be here long term.”