Jerry Jones believes Cowboys have chance to select top defensive player at No. 10 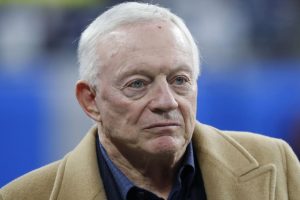 The Dallas Cowboys sit in an ideal situation to fill their need on defense Thursday night.

With nine offensive players projected to potentially go off the board before the Cowboys pick at No. 10 overall, owner Jerry Jones believes the best defensive player will still be available when he chooses.

“(We got a) good chance to have a top defensive player — the top, one of top — be there at 10,” he said, via Michael Gehlken of The Dallas Morning News.

As many as five QBs could go in the top nine picks between Trevor Lawrence, Zach Wilson, Justin Fields, Trey Lance and Mac Jones. Three WRs could be taken early in Ja’Marr Chase, Jaylen Waddle and DeVonta Smith. Two offensive tackles could go, Penei Sewell and Rashawn Slater. And tight end Kyle Pitts could land as high as No. 4.

The Cowboys desperately need to upgrade one of the worst defenses in the NFL. Secondary help is the big key, and the Cowboys could land the top corner in the draft. Alabama’s Patrick Surtain II has been a popular mock to Dallas. South Carolina’s Jaycee Horn is also an option.

The best bet is the Cowboys sitting tight and snagging the top defensive player in the draft.

But if the apple of the Dallas brass’ eye were to fall? Jones wouldn’t hesitate to shift gears.

“Don’t be stupid over your needs,” Jones said, via Jon Machota of The Athletic. “What is exciting about the 10th pick is you got a chance to do something unconventional.”

Jones proved last year in selecting CeeDee Lamb that the Cowboys will stick to their draft board and select the best player if he’s clearly the top available when they’re on the clock.

The discussion leading up to the draft has been that Jones loves Pitts, ranked by some as the top non-QB in this year’s draft. Tuesday, Jones downplayed his love of Pitts despite a recent “visions of sugar plums” quote.

Jones said Tuesday it was “not legitimate” to say he’s infatuated with Pitts. “We’re not going to spend inordinate value (to trade up for Pitts), he said, per Gehlken.

NFL Network Insider Ian Rapoport reported last week that the Cowboys wouldn’t trade up for Pitts. Sure, Jones would probably select him if the TE fell to No. 10, but the likelihood of that happening is somewhere between slim and none.

The most likely outcome is Pitts is gone, and the Cowboys get their choice of top defenders on their board, the ideal marriage of need and value at No. 10 overall.

Want to create your own mock for the 2021 NFL Draft? Check outPFF’s draft simulatorto play out countless scenarios for every team spanning all seven rounds.