Jaguars finalizing deal with Urban Meyer to be next head coach 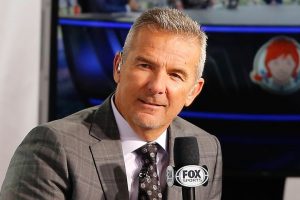 Urban Meyer is back in football — with a new twist.

The Jacksonville Jaguars are working toward finalizing a deal with the three-time national championship-winning coach to be their next head coach, NFL Network Insider Ian Rapoport and NFL Network’s Tom Pelissero reported.

Meyer is again leaving retirement and the comfortable confines of the broadcast booth for a headset and the sideline.

The 56-year-old coach is taking his first stab at the NFL with the job, bringing with him a sparkling overall mark of 187-32 in time spent at Ohio State, Florida, Utah and Bowling Green. Meyer won a national title with the Buckeyes in the 2014 season to add to his two championships earned while coaching the Gators in 2006 and 2008.

While Meyer’s time in the NFL will be new, the Jaguars’ interest in him is not. Jacksonville had eyes on Meyer succeeding the recently ousted Doug Marrone prior to the season’s conclusion.

Meyer’s jump to the NFL should come with an expectation of more than one or two losses in a season, of course, as the NFL’s parity and team-building process is drastically different from college football’s top-heavy landscape. What will also be interesting is how Meyer adjusts to coaching at the professional level, where game plan and player interaction is more important than Meyer’s greatest skill: recruiting. While the coach can attract talent with his name, he’s not spending the offseason pounding the pavement to rack up a class full of five-star prospects. Instead, it’ll be up to Shad Khan’s pick for general manager to assemble a quality roster.

That same point might help Meyer coach successfully and for a longer period. Meyer left Ohio State because of health issues brought about by the stress and workload of coaching a major Division I program, which understandably became untenable. He stepped down from Florida due to similar health concerns after the 2010 season. A lighter offseason load could prolong his chances of coaching for years to come.

If there’s one thing Meyer is skilled at, it’s coaching in big games. Meyer owns a 12-3 record in bowl games, including a perfect 3-0 mark in national championship games. The NFL will present him with a weekly big game, which will be interesting to monitor as the talent-deprived Jaguars will likely take some time to get going.

Meyer is walking into a somewhat advantageous situation, at least when it comes to quarterback. Jacksonville owns the No. 1 pick in April’s draft and is could tab Clemson’s Trevor Lawrence or Ohio State’s Justin Fields as its signal-caller of the future with that selection. Meyer will be afforded the first chance to turn either of the two into a franchise quarterback

He’ll need to use his same motivational skills that powered Ohio State to an incredible run of success with the Jaguars, who haven’t tasted legitimacy since their surprising 2017 run to the AFC Championship Game. Since then, they’ve been bottom-feeders, something Meyer — and Khan — will look to reverse before long.