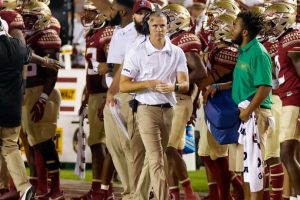 Teams are starting to make it a trend to walk off the field of Doak Campbell Stadium with a win.

First it was No. 9 Notre Dame in a thrilling overtime finish. Then it was … Jacksonville State?

The win for the Gamecocks continues what has already been a standout start to the year for FCS football programs.

It was the second score of the quarter for Jacksonville State, which had brought the game to just 17-14 with 4:45 left. The Gamecocks finished the game having outgained the Seminoles 350-335 in total yards with more third down success, with an 8-for-17 conversion rate compared to just 5-for-14 by Florida State.

Just the week prior, the Seminoles felt like it had reason to be potentially excited about the season. They took the ninth-ranked Fighting Irish — a team that reached the College Football Playoff a season ago — to overtime, but missed a field goal, allowing Notre Dame to kick one in response to walk off for the win and escape Tallahassee 41-38.

Jacksonville State is not exactly Notre Dame. The Gamecocks were coming off a home loss to UAB in which they were outgained 517-156 in total yardage and ultimately lost 31-0.

Notre Dame, too, came out in a close matchup with a team it should beat. It went to the final minute with Toledo before the heroic efforts of quarterback Jack Coan saved the Fighting Irish from a potentially dangerous loss to their CFP resume.