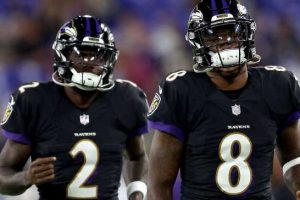 Jackson was sidelined from Sunday’s 16-13 win over the Chicago Bears because of an illness. Tyler Huntley filled in for Jackson and guided a last-minute comeback for the Ravens (7-3), who lead the AFC North by a game.

“He felt good today,” Harbaugh said Monday. “I don’t know how good. But he feels much better today, from what I was told. I haven’t seen him.”

Baltimore hosts the Cleveland Browns (6-5) Sunday night. Jackson is 4-1 as a starter against the Browns, throwing 10 touchdowns and two interceptions.

Sidelined for only the third game of his four-year career, Jackson started to feel sick last Tuesday. He missed practices on Wednesday and Thursday before returning for a full practice Friday. But the symptoms came back Saturday.

Asked if the expectation was for Jackson to participate in Tuesday’s walk-through, Harbaugh said, “The hope is. I won’t say expectation because, you know, who knows?”