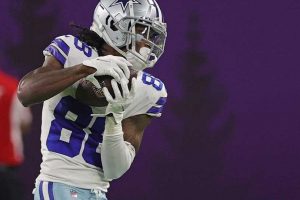 CeeDee Lamb (concussion) has been a solid fantasy producer this year, but he suffered a concussion last week and figured to be inactive for Week 12’s Thursday afternoon game. Ahead of the Raiders-Cowboys Thanksgiving showdown, Lamb’s is merely listed as “questionable,” so there’s a chance he plays. Fantasy start ’em, sit ’em decisions surrounding Lamb, Michael Gallup, and even Cedrick Wilson hang in the balance while we wait for the latest injury updates.

We’ll continue to update this article with news on Lamb up until the official active/inactive report comes out on Thursday. For all the latest fantasy updates, follow us on Twitter @SN_Fantasy.

Is CeeDee Lamb playing on Thanksgiving?

Earlier in the week, Mike McCarthy said Lamb has a chance to play against the Raiders, so his concussion must have been “minor,” if there is such a thing, and we’ll likely have to wait up until just before the start of the game Thursday afternoon to see if he can go. The latest news says Lamb “is on track” to play after he practiced on Wednesday, but we won’t make any final decisions until we know for sure.

We do know concussions are usually an all-or-nothing type of injury, though. He either clears protocols and isn’t limited or he doesn’t play at all. That makes life easier for fantasy owners. If he’s in the lineup, he’s viewed as a must-start despite the tricky matchup with Las Vegas. The Raiders give up the fourth-fewest fantasy points per game to WRs, but Amari Cooper (reserve/COVID) is out, and Lamb has been a must-start even when Cooper is in the lineup. Plus, the Raiders have largely avoided playing top-tier WRs this season, so we’re not viewing its defense like the Patriots or Bills.

Michael Gallup is already a strong flex candidate since Cooper is out, but if Lamb is out, Gallup is a must-start. Let’s just put it this way — whoever Dak Prescott’s No. 1 WR is should be in lineups. However, Cedrick Wilson’s fantasy outlook is completely dependent on Lamb’s status. Yes, you could technically start Wilson as a low-end flex regardless, but he’ll carry much more upside if Lamb can’t go. He caught three touchdowns in Michael Gallup’s absence earlier this season, so we know Prescott trusts him and isn’t afraid to look his way.

Ultimately, that was a long-winded way of saying you should start Lamb and Gallup if they’re active and consider Wilson if Lamb isn’t. View Lamb as a WR1 if he’s active and view Gallup as a mid-tier WR2 if he’s not, with Wilson coming in as a flex option.