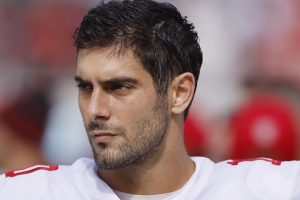 The San Francisco 49ers will have their starting quarterback in Sunday’s crucial regular-season finale.

Jimmy Garoppolo﻿, dealing with a torn ligament in his thumb, is expected to start versus the Los Angeles Rams, NFL Network Insider Ian Rapoport reports, per a source.

Garoppolo was inactive for last week’s game due to the injury. The 49ers QB injured the thumb on his throwing hand in a Week 16 road loss to the Tennessee Titans and is likely to undergo offseason surgery to repair the injury, according to Rapoport.

Rapoport adds that San Francisco did not activate another QB ahead of Sunday’s game, and players in practice said he looked normal when throwing the ball. Rookie Trey Lance, who led the Niners to a win over the Texans in Week 17, took a majority of the practice reps and will be ready if needed.

The 49ers can clinch a playoff spot with a win or tie versus the Rams, or a New Orleans Saints loss or tie. Los Angeles, meanwhile, can secure the NFC West title with a win over San Francisco.

Other injury news we are keeping an eye on ahead of Sunday’s Week 18 games: