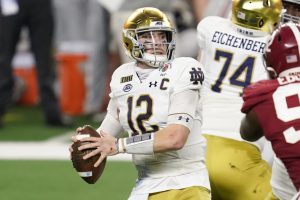 The Drew Brees era ended with the future Hall of Famer’s retirement. The Saints began their post-Brees life by adding Notre Dame’s winningest quarterback ever.

New Orleans selected Fighting Irish signal-caller ﻿Ian Book﻿ with the 133rd pick (fourth round) in the 2021 NFL Draft on Saturday in Cleveland.

Book has plenty of collegiate experience under his belt, appearing in 47 games over four seasons at Notre Dame and posting a 30-5 record as its starter, including a 15-0 mark at home. He finished with the second-most passing touchdowns and yards in Notre Dame history, trailing only Brady Quinn in that regard, and was a two-year team captain.

Book’s playing career at Notre Dame began in emergency, when he came off the bench to lead the Irish to a win over LSU in the Citrus Bowl at the end of the 2017 season. He’s since been a fixture in South Bend, and he’ll keep wearing a golden dome with the Saints in New Orleans.

Book doesn’t figure to compete for the starting job right away, not with ﻿Jameis Winston﻿ and ﻿Taysom Hill﻿ on the roster, but New Orleans found itself a developmental prospect with a long-term hope that he’ll end up rising to a starting role. If not, perhaps he could serve as a quality backup.