Home » NFL » If Melvin Gordon ever fumbles the football for Broncos again, it will be too soon

If Melvin Gordon ever fumbles the football for Broncos again, it will be too soon 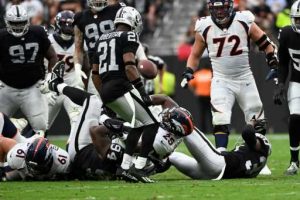 LAS VEGAS — If fumbling the football is a sin, Melvin Gordon can be forgiven. But the Broncos would be foolish to place their faith in his shaky hands ever again.

He doesn’t merely cough up the ball. Gordon gags.

“There ain’t no excuse for it,” Gordon said Sunday after his fumble led to a scoop-and-score for Las Vegas, a major reason why Denver lost 32-23.

His confidence is as broken as the faith that Broncos Country has lost in a 29-year-old running back whose fumblitis might be terminal to his NFL career, at least here in Denver.

If Gordon never carries a football again for the Broncos, it will be too soon.

The Broncos are not talented enough and their margin of error for making the playoffs is too thin to let Gordon work out his football demons in real time on the scoreboard, when every mistake can be the difference between victory and defeat.

“In the end, you can’t put the ball on the ground. It’s that simple,” said Denver coach Nathaniel Hackett, who watched Javonte Williams, his No. 1 back, get carted to the locker room with a worrisome knee injury at the outset of the third quarter.

In four games this season, Gordon has fumbled four times. Dating back to the final game of 2021, he has fumbled five times in his last 44 touches, with two of his turnovers resulting in touchdowns for the opposition.

Gordon and the Broncos simply cannot go on this way. He’s a fumbling machine. Denver needs to pull the plug.

But can we set aside the understandable anger with Gordon and rising frustration with a battered-and-broken Broncos backfield for a hot minute?

What’s more concerning than Gordon’s lack of ball security is the current state of his mental health. Hiding his emotional pain behind dark sunglasses and tugging on a canary yellow hat in shame, Gordon walked off the podium from a post-game news conference in less than two minutes after answering only three questions.

“My job is to go out there and make plays, hold onto the ball and to help put this team in the best position to win. I didn’t do that today. But I’ll be all right,” said Gordon, who seemed to be on the verge of tears as he bolted toward the team bus.

On a dog day in the desert when the Broncos lost to the hated Raiders for the fifth consecutive time, the game turned the very first time Gordon touched the football. His fumble with 3 minutes, 15 seconds remaining in the second quarter was returned 68 yards for a touchdown by Las Vegas cornerback Amik Robertson that put the Raiders ahead 16-10.

On the Broncos bench, Gordon appeared crestfallen as television cameras zoomed in on him. Social media did what it does best: rage on. I poured fuel on the fire by tweeting, “Remind me: How many times did Phillip Lindsay fumble in his Broncos career?”

Among more than 2,000 clicks of positive feedback for my comment was a “like” from Lindsay’s Twitter account. The former University of Colorado star has bounced around the league since parting ways with Denver after gaining 2,550 yards rushing in three seasons for his hometown team because the Broncos believed Gordon to be a sturdier and more well-rounded back capable of gaining tough yards between the tackles and picking up the blitz in pass protection.

Lindsay was signed by Indianapolis to its practice squad in September. The Broncos play Thursday against the Colts. The NFL prohibits poaching a member of the practice squad from a league rival within six days of an upcoming game.

Wilson and Gordon have a bond as Wisconsin alums. The Denver quarterback relentlessly preaches positivity and considers the harsh lessons learned from mistakes a gift. Wilson told Gordon: “You’re one of the best guys ever to play the game at this position. Don’t forget that.”

The Broncos got manhandled by the Raiders. With Josh Jacobs running wild, Las Vegas outgained Denver on the ground 212-85.

Wilson is now giving off early John Elway vibes, back in the day when the Broncos couldn’t win if a brash, young Elway failed to come to the rescue with hero ball in the fourth quarter. The last person I have faith in to fix Denver’s offensive problems is Gordon.

Well, this stuff has got to stop.

My sincere wish is for Gordon to find whatever help is necessary to beat his football demons and heal himself.

But the Broncos can’t afford to let Gordon do this stuff to them ever again.