How good is Ohio? Three reasons the Cinderella can go on deep March Madness run 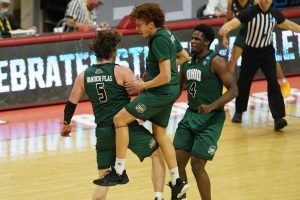 At least one Ohio team is still dancing. The Ohio Bobcats took down reigning champion Virginia on Saturday in a bracket-buster – a day after the state's powerhouse program, Ohio State, got bounced by 15th-seeded mid-major Oral Roberts.

Ohio (17-7) won the Mid-American Conference Tournament to secure its bid in these NCAAs but was hardly the best team in that mid-major league throughout the season – finishing in fifth place. So, a one-win wonder, right? Wrong.

Ohio has the firepower and winning momentum – having won 10 of 11 games – to knock off Creighton, a No. 5 seed that barely avoided an upset to UC Santa Barbara in a one-point win to advance to the second round.

Here's a look at why Ohio is far from finished in its Cinderella run and a Sweet 16 ticket is in store:

The Bobcats weren't at their best vs. Virginia

For a team that usually shoots 49% from the floor and 37% from three-point range, Saturday's game vs. U.Va. saw the Bobcats only shoot 21-for-50 (42%) and 7-for-23 from beyond the arc (30%). Plus, any team that goes up against the Cavaliers has its tempo slowed way down due to coach Tony Bennett's methodical halfcourt offense. In a more sped-up game against Creighton, Ohio should be able to show more of its ability and find better shot selection in transition or with a faster game pace.

Jason Preston is a unique talent

Preston, a 6-4 lengthy point guard with a yo-yo handle and precise passing ability, does it all for this team and makes the rest of his teammates flourish. Preston (16.6 ppg, 7.2 apg, 6.8 rpg on the season) had 11 points, 13 rebounds and eight assists in the win over Virginia – highlighting his triple-double ability. The junior guard plays like a college version of LaMelo Ball, except his decision-making is sharper (at least at the NCAA level). He's the reason why Ohio ranks sixth nationally in assists per game and 10th nationally in assist-to-turnover ratio. Preston's style of play is contagious and makes others want to feed off that unselfish energy. When the game's on the line, he can take over. Preston had 27 points in Ohio's upset of top-seed Toledo in the MAC tournament.

According to KenPom's adjusted offensive efficiency ratings, this is the 30th-best offense in the country. Coach Jeff Boals runs a system that's predicated on unselfishness and playing for each other. It showed against Virginia and will show even more against Creighton. Several players on this team, besides Preston, can fill it up from long range, including Ben Vander Plas and Ben Roderick, both of whom had three three-pointers apiece against U.Va. All five starters average double figures, and Dwight Wilson III (14.9 ppg, 7.5 rpg), a 6-8 senior, is this squad's utility man who does all the little things. He shoots 67% from the floor and is a menace on the glass.