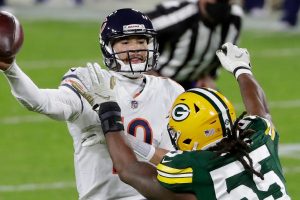 One team wants the No. 1 seed in the NFC, while the other just wants make the playoffs.

Beat the Bears at Soldier Field, and the Packers earn the first-round bye over the Seattle Seahawks and New Orleans Saints.

The Bears control their own playoff destiny. If Chicago beats Green Bay, the Bears will make the postseason for the first time since 2018.

If Chicago loses to Green Bay, the Bears can still clinch a playoff spot if the Los Angeles Rams, who will be without QB Jared Goff and WR Cooper Kupp, beat the Arizona Cardinals.

Quarterback Mitch Trubisky has performed better in the five games since his Week 3 benching, and the Bears have overcome a six-game losing streak to win consecutive games against Houston, Minnesota and Jacksonville. The Bears also have scored 30 or more points in four consecutive games for the first time since 1965.

But Chicago has not fared well in the NFL's oldest rivalry in recent years — with Green Bay winning 18 of the past 21 matchups against Chicago, including postseason games.

The Packers' latest victory in the series came on Nov. 29 at Lambeau Field, a 41-25 win that started Green Bay's current five-game winning streak.

The Packers will be without left tackle David Bakhtiari, who is out for the rest of the season and the playoffs to a knee injury that they fear is a torn ACL

What time does Packers vs. Bears start?

What TV channel is Packers vs. Bears on?

How can I watch Packers vs. Bears online via live stream?

What are the odds for Packers vs. Bears?

Where can I find score updates for Packers vs. Bears?

Gannett may earn revenue from audience referrals to betting services.  Newsrooms are independent of this relationship and there is no influence on news coverage.