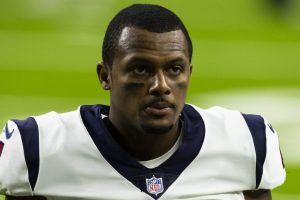 Houston lawyer Tony Bubee, who is representing all of 11 of the women who have filed suits against Watson, told reporters Friday that he anticipated filing 12 total suits against Watson. Buzbee also said he has spoken to 10 other women about Watson’s conduct.

One of the new suits against Watson accuses him of sexual assault against a massage therapist last year after he allegedly grabbed her buttocks and genitals during a massage in addition to touching her with his genitals and attempting her to coerce her to perform a sexual act.

Another suit accuses Watson of exposing himself and touching the plaintiff with his genitals during a massage earlier this month.

Buzbee told reporters Friday that he intends to put together a packet of information regarding these cases to present to local authorities.

The NFL informed the Texans on Thursday it is investigating allegations made this week against Watson under the league’s personal-conduct policy.

“I’m extremely proud to represent Deshaun Watson and wholly stand behind him against what we believe are meritless allegations,” Hardin said. “However, we’ll wait to comment in detail until we’ve completed our review of the numerous, evolving allegations from Mr. Buzbee. We will respond next week and ask you to keep an open mind until we do so.”