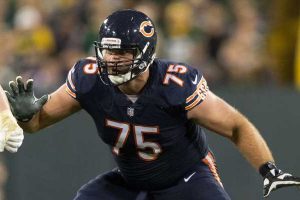 The Kansas City Chiefs are incrementally rebuilding an offensive line that failed them in Super Bowl 55.

Kyle Long, a three-time Pro Bowl guard with the Chicago Bears between 2013 and 2019, is joining the AFC champions after taking a year off from the NFL. Per ESPN, Long agreed to a one-year deal with a maximum value of $5 million.

His arrival comes two days after Joe Thuney, the New England Patriots' franchise player in 2020, agreed to a five-year pact worth up to $80 million. Laurent Duvernay-Tardif is also expected to return to the lineup after opting out of the 2020 season in order to utilize his medical degree in his native Quebec during the COVID-19 pandemic.

Long, Thuney and Duvernay-Tardif have all made their bones playing guard in the NFL, so one will have to change positions. Long has experience at tackle, and Thuney has lined up at both center and right tackle.

Kansas City quarterback Patrick Mahomes was sacked three times and hit nine times in the team's 31-9 Super Bowl shellacking at the hands of the Buccaneers. The Chiefs were without starting tackles Eric Fisher and Mitchell Schwartz that day, both shelved with injuries. They were released last week to clear cap space given there's no certainty either man will be ready to play in 2021.

HISTORY: The 21 worst free agent moves of all time

Long, 32, a first-round pick out of Oregon in 2013, has a lengthy injury history himself. He played a full 16 games for the Bears just twice in his seven seasons.

The son of Pro Football Hall of Famer Howie Long and brother of 11-year pass rusher Chris Long, Kyle Long spent much of 2020 working for CBS Sports Network, where he was an analyst on "That Other Pregame Show." Among the Long NFL family trio, only Kyle Long has yet to win a Super Bowl ring.