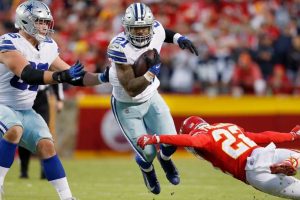 Cowboys running back Ezekiel Elliott hasn’t looked quite his usual dominant self in recent games, and it appears that a knee injury he’s had all season has continued to hamper him.

Following Sunday’s 19-9 loss to the Chiefs, Elliott explained that he re-aggravated the same knee injury he’s dealt with all season, according to the Cowboys.

“It’s feeling better, but I got rolled up on it, which kind of hurt it,” Elliott said.

Elliott went into the medical tent briefly on Sunday.He had his right leg twisted after he was tackled by linebacker Willie Gay in the first quarter following a 2-yard reception. He finished the game with 32 rushing yards on nine carries, and he caught six passes for 36 yards.

After the game, he said that he expects to be ready for the quick turnaround of playing the Radiers on Thanksgiving.

“I banged up my knee on that play, but I don’t think it set me back as far as it getting better,” Elliott said. “It’s going to be tough for some guys [dealing with injuries], but I think guys are ready to get back on the field and get this taste out of our mouths.”

Elliott has been frequently listed this season on the team’s practice report with a knee injury. He was a full participant throughout Week 11, was limited twice in Week 10. Prior to that, he was listed as having a knee injury in Week 5 and missed a day of practice and was limited in two others.

The effects of the lingering knee injury have been reflected in his recent performances. In the first five games of the season, he was averaging over 90 yards rushing per game, and that has dipped to less than 50 over the last five. Over the past five games, Elliott has averaged just 3.68 yards per attempt with 243 yards on 66 carries, and he’s scored just two touchdowns. He’s also caught 23 passes for 149 yards.

The sixth-year running back had been off to a fast start to the season through the first five weeks of the season. He had taken 85 carries 452 yards with five touchdowns, for an average of 5.32 yards per attempt, and caught nine passes for 55 yards and a touchdown. Overall, his season average of 4.6 yards per attempt still reflects his best total since 2018, when he averaged 4.7 yards.