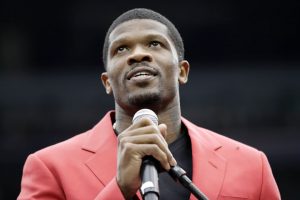 The tumult within the Houston Texans organization now includes one of the greatest players in franchise history.

Following reports last week of Deshaun Watson﻿’s unhappiness with the Texans and the process that led to the hiring of new general manager Nick Caserio, Andre Johnson publicly sided with the franchise quarterback and took a not-so-subtle shot at embattled exec Jack Easterby.

“If I’m @deshaunwatson I will stand my ground,” Johnson wrote on Twitter. “The Texans organization is known for wasting players careers. Since Jack Easterby has walk into the building nothing good has happened in/for the organization and for some reason someone can’t seem to see what’s going on. Pathetic!!!”

The Texans announced last month that Johnson, the team’s all-time leading receiver, would serve as an advisor on team’s search for a new GM and head coach. Easterby was not announced as part of the group of advisors. Owner Cal McNair said in November that Easterby — then the interim GM — would not get the job full-time and a decision on his future would be made following the hire of the new general manager.

Caserio and Easterby have a history stemming from the time the two worked together on the New England Patriots.

NFL Network Insider Ian Rapoport reported last week that Watson was “extremely unhappy” with the organization regarding his lack of involvement Caserio’s hiring after McNair previously had informed Watson that he would have a role in search for a GM and head coach and would be able to provide feedback. Rapoport noted that Watson’s issue was not related to the actual hiring of Caserio.

Rapoport reported at the time that Watson had not recently spoken with the Texans, though the organization had attempted to reach out to him.

McNair said last Friday that Watson and veteran defensive end J.J. Watt are “valued members on our team” and he looks forward to speaking with Watson when he returns from vacation.

Caserio professed the admiration he has for Watson, stating “he’s our quarterback.”

Rapoport reported Tuesday that the Texans had requested to interview Chiefs offensive coordinator Eric Bieniemy for their vacant head coach position. Due to league rules, Bieniemy will not be able to interview with the Texans until after conclusion of the Chiefs’ season.