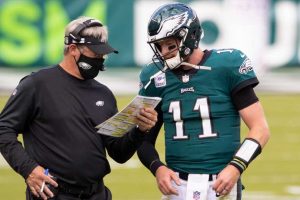 Eagles owner Jeffrey Lurie denied Carson Wentz was the reason for Doug Pederson’s departure, though he did not commit to the embattled quarterback returning next season.

Pederson, who was hired in 2016, led the Eagles to their first Super Bowl title in his second season at the helm but Philadelphia struggled this season to a 4-11-1 finish.

Wentz’s form resulted in the franchise quarterback — who signed a four-year, $128 million contract extension in 2019 — being benched in favor of rookie Jalen Hurts in Week 13, raising serious questions over his future in Philadelphia.

While doubts remain about Wentz, Lurie insisted the 28-year-old was not behind Pederson’s exit.

“My first allegiance is [to] what will be best for the Philadelphia Eagles and our fans for the next three, four, five years. It’s not based on does someone deserve to hold their job or deserve to get fired; that’s a different bar,” Lurie told reporters on Monday.

“I don’t think any owner should decide that [whether Wentz returns in 2021]. Carson, to me and to I think virtually everyone in our organization, is a quarterback that in his first four years was in many ways elite, comparable to some of the great quarterbacks the first four years in the league,” Lurie added. “The fifth year, obviously not satisfactory for whatever reasons, there are probably multiple reasons for that.

“I think the way I look at it is, we have an asset and we have a talent. He’s a great guy. He wants nothing but to win big and win Lombardi trophies for Philadelphia. This guy is tireless. He has his heart in the right place. He is really dedicated offseason, on-season. He’s just what you want.

“And it behoves us as a team with a new coach and new coaching staff to be able to really get him back to that elite progression where he was capable of, and understand at the same time that there have been many quarterbacks in their fourth and fifth year, if you trace this, you can come up with many, many quarterbacks that have a single year where it’s just, ‘Whoa, the touchdown-to-interception ratio is not what you want.’ And we’re talking some great ones like Peyton [Manning] and Ben [Roethlisberger] and guys like that.”

“So I take more of a longer view of this was not the best season for our offense,” Lurie continued. “It was a poor season. And we also had a poor season from Carson, in terms of what he’s been able to show in the past; very fixable, and I fully expect him to realize his potential.”

Pederson compiled an overall 46-39-1 record over five seasons with the Eagles, including four playoff victories.

The 52-year-old, who oversaw three consecutive postseason appearances from 2017-19 before dropping to the bottom of the NFC East this year, had not won 10-plus games since Philadelphia’s run to Super Bowl 52.