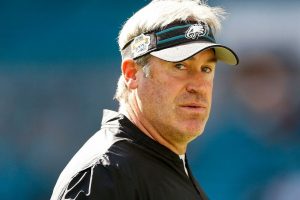 PHILADELPHIA — The Eagles fired coach Doug Pederson on Monday, ending a partnership that delivered the first and only Super Bowl title in the city’s history.

Pederson was expected to remain as coach despite a 4-11-1 finish this season, but multiple meetings with owner Jeffrey Lurie over the past week left his boss unconvinced that Pederson had a sound vision for how to address the myriad issues facing the team, sources said, from navigating the Carson Wentz situation to fixing an offense that finished 26th in scoring (20.9 PPG) and 28th in passing yards (207.9 YPG) in 2020.

“I have spent the last few weeks evaluating everything from this past year and looking ahead,” Lurie said in a statement. “We are all very disappointed with the way our season went and eager to turn things around, not just for next season but also for the future of the franchise. Coach Pederson and I had the opportunity to sit down and discuss what that collective vision would look like moving forward. After taking some time to reflect on these conversations, I believe it is in both of our best interests to part ways.

“I have known Doug and his family for more than 20 years and they will always be family to me. I have a tremendous amount of respect for him and everything we have accomplished together over the last five seasons. Everyone in the organization understands the type of man and coach that he is, and how much he means to all of us as well as the City of Philadelphia. We all look forward to the day he will be inducted into the Eagles Hall of Fame as a Super Bowl-winning head coach, and we are confident he will have success with his next team.

“But as the leader of this organization, it is imperative for me to do what I believe is best for everyone as we look ahead to the future and move into our next chapter. I know that we have work to do to get back to where we want to be, but I also believe that we have an exceptionally strong group of people in this organization who can help set us up for future success.”

Lurie was also not sold on Pederson’s plans regarding his coaching staff, sources said. Pederson pushed for passing game coordinator/quarterbacks coach Press Taylor to be elevated to offensive coordinator rather than bringing in a more established candidate. The issue of how to fill the void left by defensive coordinator Jim Schwartz, who plans to take the year off from football in 2021, was also unresolved.

Wentz regressed dramatically in his fifth year and was replaced in the lineup by rookie Jalen Hurts for the last quarter of the season. Wentz has planned to ask for a trade in the offseason because his relationship with Pederson was fractured beyond repair, according to league sources. The trust issues between the two work both ways, sources said, despite Pederson recently saying that his relationship with Wentz was fine.

Sources describe an offense in 2020 that lacked an identity, in part as a result of a sizable and mismatched group of assistants and consultants brought in last offseason who struggled to get on the same page. The absence of a central vision for what the offense should look like made quarterbacking an uphill climb, and all the voices created a cacophony for Pederson and Wentz alike, sources said.

As for Hurts, a second-round pick last April, there was not firm clarity from Pederson on whether he had a sense that the franchise had its quarterback of the future if the Eagles should move on from Wentz. The handling of the season’s final game, in which Hurts was pulled in favor of Nate Sudfeld in a 20-14 loss to Washington, also left questions about whether Pederson had lost his players’ confidence.

Pederson became just the eighth NFL head coach to win a Super Bowl within his first two years at the helm when the Eagles beat the New England Patriots to capture the Lombardi trophy during the 2017 season. That was the first of three straight playoff appearances for the Eagles under Pederson before the wheels came off in 2020. He compiled a record of 46-39-1 over five seasons with the Eagles, including four playoff wins.