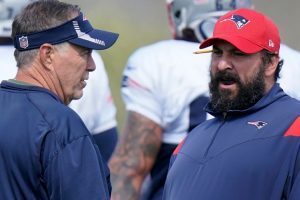 Patricia called the plays for the opening two series with veteran Brian Hoyer at quarterback Thursday night, then Judge took over when rookie Bailey Zappe entered the game.

“I thought it would be a good opportunity for us to do that,” Belichick said.

Asked if he knows who will call plays when the regular season arrives, Belichick said: “Don’t worry about that. We’ll work it out. … We’re going through a process. Just like everything else on this team.”

Patricia and Judge both coached from the sideline, and when the defense was on the field, Patricia often huddled with the line while Judge was with the quarterbacks.

“I just listened to my helmet and called the play that was said to me. So whether it’s Matt or Joe or whoever it might be, I’m not concerned about [that]. I’m worried about what defense they’re running and how we’re going to execute the play.”

The Patriots, who rested starting quarterback Mac Jones and most of their starters, finished with 308 net yards of offense.

Asked his thoughts on how the communication was with Patricia and Judge calling plays, Belichick said: “I didn’t think [it] was a problem. … I thought we were on the ball quickly, had plenty of time to operate. We had to audible a few times and were able to do that. There’s plenty of room for improvement. I’m not saying we’re there yet, but getting there.”