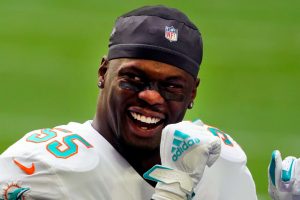 This past Friday Dolphins linebacker Jerome Baker﻿ told reporters he wasn’t worried about a contract extension “right now.” On Sunday, we learned why.

Baker’s payday is a testament to the unwavering production that has largely gone under the radar the past two years. The 24-year-old has emerged as one of the leaders of a budding young defense, leading the Dolphins in tackles in each of the past two seasons. His extension comes after posting a career-high seven sacks in 2020.

A third-round selection in 2018, Baker was headed into the final year of his rookie contract before the extension, which would’ve earned him $2.43 million in 2021. The Dolphins’ decision to hand Baker a well-earned raise avoids any threat of drama after a contract year and locks in a productive player who’s voiced his desire to stay with the organization.

“I want to play here for the rest of my career. I love it here,” Baker told reporters Friday. “I love the fans. I love the organization. I love everybody here. Yeah, I definitely see myself playing here for a long time.”