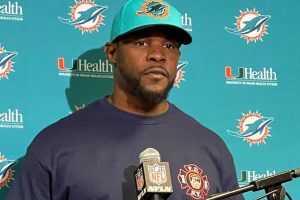 MIAMI — The Dolphins fired head coach Brian Flores after three seasons with the franchise, the team announced Monday morning, barely 12 hours after he coached the team to a 33-24 victory over the New England Patriots.

General manager Chris Grier will remain with the team in his current role, ESPN’s Jeff Darlington reported. Next season will be Grier’s seventh season as the team’s GM.

The decision came from Dolphins owner Stephen Ross, who released a statement offering an explanation.

“I made a decision today to part ways with Brian Flores,” Ross said. “After evaluating where we are as an organization and what we need going forward to improve, I determined that key dynamics of our football organization weren’t functioning at a level I want it to be and felt that this decision was in the best interest of the Miami Dolphins. I believe we have a talented young roster in place and have the opportunity to be much better in 2022.

“I want to thank Brian for his hard work and wish him nothing but the best in his future.”

Despite speculation that Ross was interested in hiring Jim Harbaugh as coach, the Dolphins are not targeting the Michigan coach, sources told Darlington.

Flores now is expected to be a prime candidate to get head-coaching consideration elsewhere during this next hiring cycle, sources told ESPN’s Adam Schefter.

Miami was expected to compete for an AFC East title in 2021 after finishing 10-6 and missing the playoffs in 2020. The team won its opening game before losing seven straight, putting itself in a hole no other team in NFL history has come back from to make the playoffs. However, Miami responded to its seven-game losing streak with a seven-game winning streak — becoming the first team in league history to do both in the same season.

However, the high of that winning streak came to a sudden stop when the Dolphins were blown out by the Tennessee Titans in Week 17, knocking them out of playoff contention for the fifth straight season.

Flores was just the fourth coach in franchise history to record two winning seasons in his first three years with the team, going 24-25 in his tenure and 4-2 against his former boss, Bill Belichick — the best mark of any coach against Belichick while at the Patriots’ helm.