Home » NFL » Devin White: The impact of my late brother's mentorship on my NFL journey, life

Devin White: The impact of my late brother's mentorship on my NFL journey, life 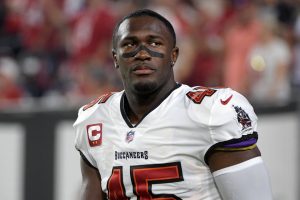 EDITOR’S NOTE: For more on a story near and dear to Tampa Bay Buccaneers linebacker Devin White’s heart, watch next week’s episode of NFL Network’s NFL 360, which airs at 8 p.m. ET on Tuesday, Sept. 28.

Emotions run high on game days with cheers from thousands of the world’s greatest fans coming in waves, but one ritual is always part of my routine before kickoff, no matter what.

I pray to my late brother — J’Marco “Jae Jae” Greenard, who died in a car accident in June 2011 when he was 19 years old and I was 13 — asking him not to just be with me but to play through me. And though he’s not there in person, I can feel him with me every time I step foot on the field.

I looked up to Jae Jae so much growing up. His mentorship shines through every part of me, but it’s his work ethic and positive outlook that continue to make the biggest impact on my life.

As kids growing up in Cotton Valley, Louisiana, we were both very active and his determination to be a great athlete pushed me to reach my own goals. I loved seeing Jae Jae in the spotlight and his success in sports — he won a state track championship his senior year — motivated me to become the guy everyone looked up to in my own sport. People were thrilled to watch him compete at meets, but what they didn’t see was the work he put in when no one was watching.

We didn’t have a track in Cotton Valley, a small, rural town in northwestern Louisiana, but I remember watching Jae Jae run up and down the hill near our home. He and his dad, Willie Standokes (my stepfather), even figured out how many times Jae Jae would have to run around our single-wide trailer to equal a mile. He was always out there sprinting and working on his speed. His work ethic was phenomenal, and it spoke volumes about his determination that he accomplished so much despite having so little.

I knew I needed to put in the work, like Jae Jae did, to get where I wanted to go. Following his example has no doubt paid off in my football career so far, having been a member of a Super Bowl-winning team in my second NFL season after being drafted fifth overall out of LSU in 2019. Yet, there’s still so much left for me to do.

Jae Jae was a light for those around him away from athletics, too. He was able to make his family members, friends or even strangers smile and laugh. His positivity was contagious, and that’s the trait I try to emulate the most. I pride myself on being a big energy guy who everyone wants to be around. And I think most people inside the Buccaneers organization would tell you I’m one of the more upbeat guys at work. Whether it’s Day 1 of training camp when everyone is excited for the beginning of a new season or Day 150 when we’re grinding late in the year, I’m still bringing that same energy. We have to enjoy every part of life while we’re here because our time could come at any moment. Jae Jae taught me that.

With my brother playing such an important role in my upbringing, I’ve embraced paying it forward and being a mentor for the next generation. I’ve taken two kids from Cotton Valley — Xavier McGlothan and Jacobreious Walker — under my wing in recent years, showing them new opportunities from bringing them to Bucs games to riding horses back home. I want what’s best for them and all the kids I get to meet.

One of the greatest parts of mentoring is seeing your positive influence on their lives but it’s also rewarding to see what the kids teach you. Xavier, Jacobreious and others have taught me patience. It’s funny when I look back because Jae Jae probably experienced the same thing hanging around me when we were growing up.

Having had an incredible guide in Jae Jae, who made such an impression on me and altered how I approach life, I have a deep appreciation for the meaningful impact I can have on kids in the community as a professional football player. It’s something I don’t take for granted, and I know it’s how I can keep Jae Jae’s memory alive.