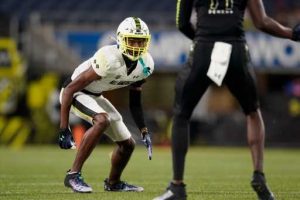 Cormani McClain didn’t cover receivers so much as smother them. The way a wool blanket smothers a campfire.

“The only cornerback (in greater Miami) that I can remember that looked like Cormani was Pat Surtain II,” Samari Rolle, the former Pro Bowl defensive back and now a prep football coach in South Florida, told me late last week.

“He looked like he could go to the (NFL) combine in high school and fit in. (Surtain) was the last one I saw that had the same physical profile.”

No wonder Coach Prime couldn’t stop dancing. When Cormani “Money” McClain — a 6-foot-2, 165-pound speedster out of Lakeland, Fla. — flipped this past Thursday from his hometown Miami Hurricanes to the Buffs, CU found itself with a secondary that included 247Sports.com’s No. 1 corner from the Class of 2023 and the site’s top corner from the Class of ’22 (Travis Hunter).

“He’s skinnier, a little bit longer than Pat was at (the prep) level,” offered Brett Goetz, founder of the esteemed South Florida Express, the nation’s best 7-on-7 team, an organization whose alumni include Teddy Bridgewater, Amari Cooper, Asante Samuel, Surtain and McClain, who played with the Express last year.

“But if you look at what PS2 has done (in college and with the Broncos), I think Cormani really could be that same guy, with some great coaching.”

McClain’s already had his ear bent by some great ones, including Rolle. The ex-Titans and Ravens bulwark was the Express’s defensive coordinator for a roster that traveled coast-to-coast in 2022, winning tourneys in Chicago, Orlando and three more in South Florida.

“You don’t really see guys, especially at that age, with his physical profile. He reminds me of (former Pro Bowler) Antonio Cromartie, but (Cormani) can bend more, he’s more flexible. I don’t think he’s as explosive as Cromartie. You don’t see kids with (McClain’s) size and ability … he’s got those long arms. If you were drawing up a corner, that’s what you would draw up.”

And here’s the crazy part: The kid’s still raw, still figuring out how to play the cornerback position. As a sophomore and junior at Lake Gibson (Fla.) High School, McClain was a two-way star who was more advanced as a receiver, racking up 1,120 all-purpose yards and 13 touchdowns (two on the defensive end) over those two seasons.

“The college weight room and meal plans will be very, very good for him,” Goetz chuckled. “But he’s got a frame to really build on. And he’s got the perfect height for these corners that (college coaches) love, these long corners. The kid could jump out of the building.”

Life on the road bares a kid’s soul, and Goetz found Money McClain to be a curious, conscientious young man with a sly sense of fun. During their junket to Chicago, Deion Sanders’ latest commit was so fascinated by cold weather that at one point, while walking the streets of the Windy City, he picked up a chunk of snow about the size of a rugby ball and playfully hurled it at his unsuspecting teammates.

“CU,” Goetz said, “is going to be a great situation for him.”

So how great could the Buffs’ defense be with McClain patrolling one side of the field and Hunter running around on the other?

“(That) secondary,” Goetz replied, “could be insane.”

“If they allow (CU cornerbacks coach Kevin) Mathis to coach them and listen to the instruction from Coach Prime,” Rolle added, “they should be the best pair in the (Pac-12) by midseason.”

For a Florida State guy, Rolle knows the Pac-12. He knows Boulder, too. A first-team NFL All-Pro selection with the Titans back in 2000, Rolle remembers almost picking CU out of Miami Beach (Fla.) High after being wooed by Buffs icon Bill McCartney. Almost.

“My parents said it was too far,” Rolle laughed. “But I really liked it.”

There’s sooooo much he likes about McClain right now. The upside. The swag. In the Pac-12, Money talks.

“If he listens and he allows (the Buffs) to coach him, he’ll be a top-10 (NFL draft) pick, how he’s supposed to be,” Rolle gushed. “But nothing is a sure thing. The thing is, he’s got so much natural ability, he’s been able to use that a lot.

“Now he’s going to be coached very hard by Deion and by Coach Mathis. The thing is, I hope he doesn’t put too much pressure on himself, like if someone catches the ball (on him) or something like that, because he’s not used to that. If he listens, they will get everything out of him. I expect big things out of him as long as he listens. He’s got the perfect coaches.”

And the perfect storm. The Buffs have Money to play with. And payback that feels decades overdue.