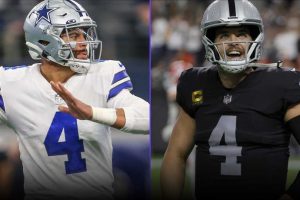 When the Raiders (5-5) travel to Dallas to take on the Cowboys (7-3) for the late afternoon game on NFL Thanksgiving (4:30 p.m. ET, CBS), they will be looking to salvage what’s left of their fading playoff chances in the AFC. Las Vegas is only two games worse than Dallas considering its overall body of work, but it has been trending in the wrong direction with three consecutive losses after its bye.

The Cowboys would like to go back to their dominant ways after losses to other AFC West teams, the Broncos and Chiefs, in two of the past three games. ailments on offense have slowed them down around Dak Prescott. Top wide receivers Amari Cooper (COVID-19) and CeeDee Lamb (concussion), while left tackle Tyron Smith (ankle) and running back Ezekiel Elliott (knee) will hope to be effective playing through their injuries.

The Raiders need Derek Carr to break out of his slump to have any chance of ending their skid and dropping the Cowboys to 1-3 against their division. As the Cowboys lost at Kansas City, the Raiders fell hard at home to the Bengals last week.

Here’s everything to know about betting on Cowboys vs. Raiders in Week 12, including updated odds, trends and our expert’s prediction for the 2021 NFL Thanksgiving game.

The Cowboys are more than touchdown favorites despite some key missing players because they are deep at wide receiver and having Smith and Elliott looking healthier is a huge development. The Raiders’ average margin of defeat in the past three games has been 20 points.

The Raiders and Cowboys have played only 12 times. Each team has won six games in a limited series that dates back to 1974. Going back to 2009, the Cowboys have won three consecutive games to pull even. Before then the Raiders enjoyed a three-game winning streak.

—53 percent of spread bettors think the Cowboys are too heavily favored in the game and expect the desperate Raiders to keep it closer on a short week.

—A whopping 70 percent of over/under bettors don’t believe the total will go above the high number, given the recent play and current limitations of both offenses.

The Cowboys’ defense keeps playing well for Dan Quinn with young playmakers Micah Parsons and Trevon Diggs leading their way. They have been active and aggressive and although the Raiders can exploit them at times with tight end Darren Waller and slot receiver Hunter Renfrow, they won’t be able to either run or stretch the field well. This feels like another game where Carr will be pressured into shaky play.

Dak back on the attack

The Cowboys failed to score a touchdown against the Chiefs after scoring at least two in every game this season. Prescott is down Cooper and Lamb, but he still has wide receivers Michael Gallup and Cedrick Wilson and tight end Dalton Schultz as key targets. He tends to play better at home, like the rest of the team, and that should help them find explosive and balanced offense.

The Cowboys tend to win and give themselves a Happy Thanksgiving at home. Their record on the holiday is 28-15-1. They also lost last year to Washington and didn’t like the taste of it. That was without Prescott in the lineup so the confidence and swagger should be back.

132.1. That’s how many rushing yards on average the Raiders’ defense is yielding, which ranks them No. 29 in the NFL. The Cowboys haven’t not been abel to run well of late because of Elliott being banged up and game script flowing out of their favor. But this game screams for them to get back to basics and pound away with Elliott and Tony Pollard, also using both often as short-area receivers to further extend the running game.

The Raiders are trending in the wrong direction while the Cowboys are just overcoming some midseason hiccups related to personnel and matchups. The Broncos game was a fluke at home while the Chiefs game became a tough situation in the elements on the road. The Cowboys will find comfort in victory again, with the Raiders doing some cosmetic work late to make the game still not close.