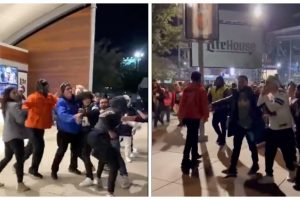 A group of Dallas Cowboys fans were involved in an ugly brawl following their team’s play-off defeat to the San Francisco 49ers on Sunday. The Cowboys took on the 49ers in the divisional round of the NFC playoffs over the weekend at the Levi’s Stadium.

It was the hosts who prevailed, as 49ers man Robbie Gould proved to be the star of the show, guiding his team to a 19-12 victory over the travelling Cowboys. Whilst there was cause for celebration in San Francisco, that wasn’t the case for their opponents.

For the clash, the Cowboys hosted a screening of the game on the grounds of the AT&T Stadium for their fans back home in Texas. As fans began to leave the Dallas-based stadium post-match, it seemed disappointment from their team’s result boiled over.

A video shared online shows a disturbing clip of the fanbase fighting amongst themselves. The clip in question shows one fan fall to the floor, whilst a group of others continue to land punches.

JUST IN:Patrick Mahomes with subtle message to Cincinnati Bengals ahead of rematch

A second video shows blows being exchanged between another group of supporters near a concession stand, before a security team made their way in to break up the brawl. It was no doubt an evening to forget on and off the field for the Cowboys.

Speaking after their disappointing loss, head coach Mike McCarthy said: “I think, really, as a whole today… we knew it was gonna be a slugfest. We just didn’t get enough. You can go through the decisions, the statistics, but I think, defensively, we did a really good job, for the most part…

This disappointment was also shared by his quarter-back Dak Prescott, who added: “All I can think about right now is this game and how disappointed I am at this point in my play. How disappointed I am for the guys in the locker room who played their asses off and we weren’t able to get it done.”