Colts HC Frank Reich: Analytics supported decisions to go for it vs. Bills 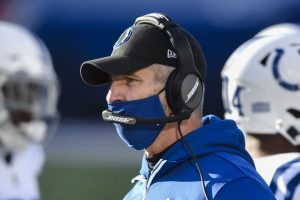 Frank Reich’s Colts lost by three in a wild-card game in which he decided to go for it on fourth-and-goal, and to go for two multiple times against the second-seeded Buffalo Bills.

One of those three scenarios worked in his favor, and because he didn’t settle for the field goal near the end of the first half, he was understandably asked about why he made such an aggressive call with a lead on the road.

Reich’s answer? Point to the percentages.

“I think the analytics were a fairly strong go,” Reich said Saturday after the Colts’ 27-24 loss to the Bills, via the Indianapolis Star’s Joel A. Erickson.

The analytics would likely say the benefit of scoring and going ahead 17-7 is worth the risk more than taking the three points gained from a field goal. Reich followed this line of thinking, and his players didn’t execute, with Philip Rivers﻿’ pass glancing off the hands of an open Michael Pittman for an incompletion and turnover on downs — and leaving the Colts leading 10-7.

“If you don’t make it, they’re backed up, they’re likely going to be conservative and you have a chance to get it back,” Reich explained.

The problem was, Buffalo wasn’t conservative, instead covering 96 yards in just 1:32, with Indianapolis jumping offsides on fourth-and-3 to gift the Bills a fresh set of downs deep in Colts territory. Buffalo capitalized with Allen’s 5-yard rushing score, making Reich’s decision to go for it look that much worse.

Indianapolis’ red-zone failure wasn’t without effort. A play earlier, Reich dialed up a toss to the left with some pre-snap misdirection to the right, getting a look their film study told them should be an easy score. Instead, Buffalo blew it up for a loss of three.

Then, Reich schemed up a play that freed Pittman on a drag, but he and Rivers simply didn’t execute.

“Immediately after, I was thinking, ‘Should have just run it up the gut,'” Reich said. “Then on the two-point later, ran it up the gut with our best play, didn’t work.”

It’s easy to question these types of decisions with the luxury of hindsight, but there’s an important point folks are overlooking: “Taking the points” isn’t guaranteed.

Rodrigo Blankenship wasn’t automatic Saturday, clanging a 33-yard attempt off the right upright that also would have brought the final result to a tie, had he converted.

Reich’s team had a shot in the second half because of Rivers, who threw them back into the game while orchestrating an up-tempo offense. Indianapolis transformed from a team bent on dominating time of possession with methodical, grinding drives to one looking to strike quickly, and it worked — until the final possession.

Did the decision to go for it on fourth-and-goal cost the Colts, and potentially end Rivers’ career with another heartbreaking postseason loss? Perhaps, but not entirely. Reich’s decision to challenge a would-be fumble by Zack Moss didn’t help, as it cost the Colts a timeout and left them with little flexibility on their desperate final drive. There were a number of other outcomes that could have swung the game drastically, too.

Football games tend to come down to seven or eight significant plays, and the fourth-and-goal failure was one. But there were still a half-dozen others, and the Colts will have plenty of time to review what could have been in the weeks ahead.