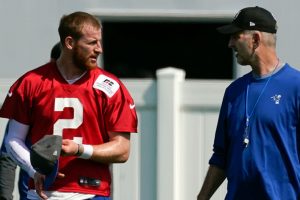 Defensive coordinator Matt Eberflus said there is neither new information nor any sort of timetable for his return, according to ESPN’s Mike Wells. Eberflus is handling press conferences for the time being with head coach Frank Reich quarantining after a positive test for COVID-19. Reich is expected to return to practice Monday.

But while nothing’s changed with Wentz, there is at least one change around the Colts’ sudden concern at the position. The team has signed QB Brett Hundley﻿, young to be called a journeyman at 28, but nevertheless now on his third team in four NFL seasons. Hundley was regularly designated inactive by the Cardinals last season. He’ll join Jacob Eason in Colts camp at the position, along with a pair of longshot rookies in Jalen Morton and sixth-round pick and former Texas Longhorns standout Sam Ehlinger. Those four will have to hold down the preseason for the club, as Wentz is expected to miss at least that much time and might require minor surgery, according to NFL Network Insider Ian Rapoport.

Meanwhile, the club will send Wentz to a foot specialist. It’s a less-than-ideal start for a talented passer looking for a career rebound with his second NFL club after a rough 2020 with the Philadelphia Eagles. If surgery can be avoided, perhaps Wentz can avoid missing any regular-season action.

Saturday, however, wasn’t the day for any such determination.