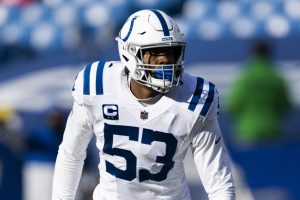 ﻿Fred Warner﻿’s record-setting contract not only brought a smile to the face of San Francisco 49ers fans, fellow linebacker ﻿Darius Leonard﻿ and his reps undoubtedly sport an ear-to-ear grin Wednesday.

With Warner’s five-year, $95 million extension in the books, Leonard is next in line to get paid. As with all escalating contract situations among star players, the next to get paid usually becomes the richest at his position.

NFL Network Insider Ian Rapoport noted on NFL NOW that Leonard’s reps have been in discussions with the Indianapolis Colts about a new deal and were essentially waiting for Warner’s deal to get done before talks heated up further.

Rapoport added that Leonard should become the new highest-paid inside linebacker in the NFL in the “near future.”

Both Warner and Leonard are coming off All-Pro seasons. For the Colts’ linebacker, it’s the second time he’s been named an All-Pro in his three seasons. Warner thrives in coverage — and is one of the best coverage players in the NFL regardless of position. Leonard is a tackling maven who patrols the middle of the Colts defense, gobbles up all the trash, can stuff plays behind the line of scrimmage, and rush the QB when asked. In 42 career regular-season games, Leonard has earned 416 total tackles (9.9 per game played) with 15 sacks from his inside linebacker spot.

Both Leonard and Warner are key members of their clubs and deserve the massive new contracts they’ll sign.

Today is Warner’s day to cash in. Soon it’ll be Leonard’s.