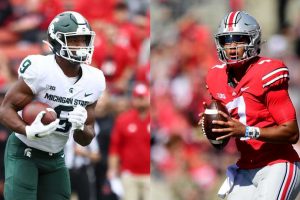 Only three games take place between ranked opponents in Week 12 of the college football season, but boy are they doozies.

First and foremost is the gigantic conference matchup between No. 4 Ohio State and No. 7 Michigan State in Columbus, Ohio. No Power 5 conference race is more compelling than the Big Ten’s, which has three legitimate College Football Playoff teams out of the East division in the Buckeyes, Spartans and No. 6 Michigan. All teams enter the penultimate week of the regular season with one loss, but that’s soon to change.

Depending on the outcome of Saturday’s game between Michigan State and Ohio State, the Spartans either take a commanding lead in the divisional race, or the whole thing comes down to “The Game” in Ann Arbor a week later.

Another ranked game in Week 12 is No. 21 Arkansas at No. 2 Alabama. The Razorbacks have seen an incredible turnaround in Year 2 under Sam Pittman, but face one of their biggest tests of the season in Tuscaloosa. The Crimson Tide have looked far from impervious this year, barely surviving Florida and LSU and losing to Texas A&M. A win on Saturday would guarantee Nick Saban and Co. make it to Atlanta to face Georgia in the SEC championship game. A loss makes the Iron Bowl a must-win situation for Alabama, otherwise the Aggies will represent the SEC West.

The last game between ranked opponents is No. 3 Oregon at No. 23 Utah, which should be the first game of a double-header between these teams. The Ducks are the only Pac-12 team capable of making the playoff, but must win out if they want to become the first team since Washington in 2016 to achieve that feat. Utah, even with a loss on Saturday, can make the Pac-12 championship game with a win over Colorado in Week 13. The Utes should have two chances at playing spoiler against the Ducks.

Sporting News breaks down how to watch those games and more in Week 12. Here’s everything you need to know: