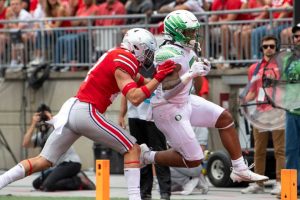 The biggest surprise of the Week 2 slate came when No. 12 Oregon, fresh off a narrow 31-24 win over Fresno State and missing its two best defensive players, went into Ohio Stadium and beat No. 3 Ohio State, 35-28. The defense was far from perfect, giving up 612 yards, but also limited the Buckeyes to 6 of 15 and 2 of 5 on third-and fourth-down conversions, respectively. Oregon running back CJ Verdell was excellent as well, rushing for 161 yards and tallying three total touchdowns.

Elsewhere, No. 10 Iowa “upset” No. 9 Iowa State in Kinnick Stadium, winning convincingly in a 27-17 over Matt Campbell and Co. It’s the Hawkeyes’ sixth straight victory in the series, which also saw the first ranked matchups between the two teams on Saturday.

BENDER: Oregon’s upset of Ohio State was a long time coming for Pac-12

Though it won’t affect the polls, Florida State also suffered a significant upset, losing its first ever game against an FCS opponent when Jacksonville State completed a last-second Hail Mary to win 20-17.

With that, here are the updated AP Top 25 and Coaches polls heading into Week 3 of the season: