Inevitably, the College Football Playoff selection committee will need to consider the case of Wisconsin.

Often messy under the best of circumstances, the current playoff debate will be complicated by mismatched schedules and the conflicting numbers of games played by the best teams from the Power Five conferences.

Beginning with the debut rankings, which will be released Tuesday, the selection committee will need to weigh the merits of specific teams across a wide spectrum of data points — from the eight games played by Clemson and Notre Dame to the three games played by Ohio State and the two played by Wisconsin, Oregon and USC.

Fitting this knotty and muddled regular season, it’s impossible to predict how the process might unfold. 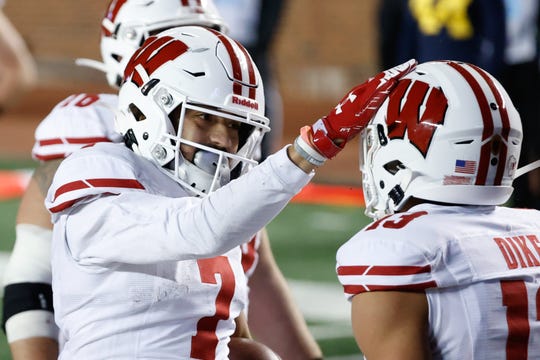 The playoff remains committed to posting the final rankings on Dec. 20, playing the national semifinals on Jan. 1 and crowning the national champion on Jan. 11, unless complications caused by COVID-19 force a scheduling change.

In the Big Ten and Pac-12, late entries into the regular season have been exacerbated by a predictable run of cancellations and postponements due to COVID-19, setting both leagues even further behind the ACC and SEC.

Several Big Ten teams, including unbeaten Northwestern, have played the full allotment of four games. But Wisconsin has played only twice, with a pair of cancellations sandwiched between wins against Illinois and Michigan. Ohio State played three games before this past weekend’s game against Maryland was canceled due to an elevated number of COVID-19 cases within the Terrapins' program.

There is another dynamic to consider: Wisconsin and Ohio State could fall under the minimum number of games needed to be eligible for the Big Ten championship. Teams must play at least six games to remain in contention for the conference championship game, according to the current Big Ten guidelines.

While the Pac-12 season has been slowed by COVID-19 outbreaks since beginning Nov. 7, the five cancelled games have not impacted Oregon and USC, which remain on pace to play as many as seven games during the regular season.

Without the help of non-conference play to inform the strength of the various leagues, how will you compare one conference champion to another?

Given the lack of intersectional games, what role, if any, can perceived strength of schedule play in the process?

If the committee relies more than ever on the eyeball test, does that bode well for Group of Five teams such as Cincinnati, which has won all seven of its games by 14 or more points and the last four by 28 or more?

And in the final comparison, will total wins be a tiebreaker when measuring two playoff contenders?

On the other hand, "The fact that one team played three more games than another team, I don’t think that will rule somebody out," Deromedi said.

If shared among the current members of the committee, the opposing viewpoints — that playing more or fewer games is either a deciding factor or one that can be considered in context — should allow for a wide range of interpretation with no obvious beneficiary.

"People bring different values and different talents and skills at different times," said Robert Morris University President Chris Howard, a member of the committee from 2017-20. "I think the coaches’ perspective has always been valued. I wouldn’t necessarily want to say it’s going to be more or less. But I would want to say, thank goodness they’re in the room."

Wisconsin will provide the most interesting case in the debut rankings. The Badgers do not have the same reputation as Ohio State, which even when idle in September and much of October was included alongside Alabama and Clemson as the prime contenders for the national championship. Minus the Buckeyes and Indiana, every team ahead of Wisconsin in this week's Amway Coaches Poll has played at least six games.

But the Badgers have dominated when they played, with the wins against Illinois and Michigan coming by a combined 75 points. In comparison, Miami's six wins against ACC competition have come by 74 points. Under the conditions set this season, can two be considered equal to six?

"You’re trying to normalize, trying your best to compare if not oranges to oranges then oranges to nectarines," Howard said. "You get as close as you possible can."

Australia v India: All the action from the second ODI at the SCG