Home » Chris Carson on Seahawks backfield with Rashaad Penny: 'I think we can be one of the top rushing duos' 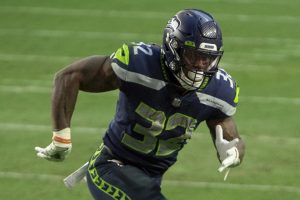 During the free-agent process, it looked like ﻿Chris Carson﻿’s run in Seattle might end, and the reins to the Seahawks backfield handed to ﻿Rashaad Penny﻿.

Any such thoughts went out the window when Carson re-signed with the Seahawks last month.

Carson told reporters Thursday that the two backs can dominate together.

“If we stay healthy, I think we can be one of the top rushing duos in the league,” Carson said via the team’s official website. “We both bring different things to the game, different attributes, but we complement each other so well. I just feel like his limit is ridiculous once he starts getting his feet wet in the game. I think it’ll be something special.”

Staying healthy has been an issue for both backs. Neither has played in 16 games in a season.

Carson missed four games in 2020 due to a foot injury, and the Seahawks’ offense struggled when he wasn’t available. Penny, meanwhile, played in just three due to an ACL tear suffered the previous season. Penny returned late in the season but saw just 11 carries for 34 yards in limited work. The Seahawks hope that their former first-round pick’s career can bounce back the further he gets from the injury.

The injury history for both backs — and ultimately the uncertainty surrounding Penny — led to the Seahawks shelling out a two-year deal worth up to $14.625 million to ensure Carson was around longer.

In Pete Carroll’s desired run-first system, having multiple reliable backs is a benefit. Carson’s importance to Seattle isn’t lost on Russell Wilson. The running back said his QB pushed for him to re-sign in Seattle.

“He was definitely in my ear,” Carson said of Wilson. “We talked about it before the season ended that we didn’t want this to be the last year we played with each other. He definitely was in my ear during the offseason.”

The Seahawks have their backfield duo back for another run. Now Seattle needs both to stay healthy for a full season.